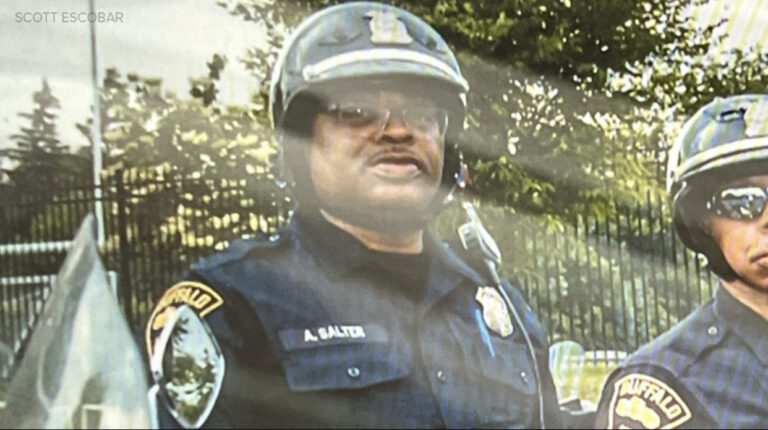 Aaron Salter Jr, a retired Buffalo police officer who worked as a security guard at the supermarket where Payton Gendron opened fire on Saturday; is being hailed as a hero for confronting and firing shots at the mass shooter before being fatally shot.

He was one of ten people killed in the attack; which is being investigated as a hate crime. Almost everyone who was killed or injured was black; including Aaron Salter Jr. According to officials; the 55-year-old security guard fired multiple shots at the attacker; striking his body armor at least once. Unharmed; Payton returned fire, killing Salter.

Buffalo Police Commissioner, Joseph Gramaglia said Sunday; “He’s a true hero.” ” There could have been more victims if not for his actions.”

During an event honoring police and other public safety officers at the White House on Monday; US President Joe Biden; also praised Salter’s bravery. Biden stated that; Salter “gave his life trying to save others.”

Payton Gendron, 18; was arrested and charged with murder. He entered a not-guilty plea.

Those who knew Salter; told local media, that his goal during his 30 years as a Buffalo police officer was to protect his community. That impulse persisted even after he retired from the force in 2018.

“Aaron was a great individual. And I know in his heart he wanted to save as many people as he could.” Scott Escobar; a retired Buffalo police officer who worked in the traffic division with Salter for several years; told WGRZ. “It didn’t surprise me to hear; he engaged the guy right away and tried to stop him; He was the kind of guy that would lay down his life like that and protect his community.”

Customers at the Tops Friendly Market; said Salter knew them by name and was a popular figure in the predominantly Black neighborhood. Salter; who applied to become a police officer after graduating from high school in the late 1980s; was no stranger to dangerous situations.

In a 1996 Buffalo News article; he responded to an armed robbery call with a fellow officer; where one of the suspects threatened them with a gun.

Salter also worked as an educator with Buffalo Public Schools; where he worked as a substitute teacher from 2008 to 2011.

His Invention And Company

However, it appears that his true calling; was as an amateur scientist and inventor. He spent years developing a car engine. One that could run on water in order to reduce gasoline consumption; splitting molecules with electricity to isolate hydrogen for energy.

Salter’s company; AWS Hydrogen Technologies; Featured in a 2015 video that gives a tour of his custom pickup truck; which uses the hydrogen-electrolysis-powered engine prototype he developed.

He expressed his desire to collaborate with a company. One that could make his water-powered engine a reality for vehicles, generators, and even boats and motorhomes.

“I’m a Buffalo police officer, and I make a nice salary; but there’s no way I can push forward a whole Industry on this salary.” He explained. “This is my contribution.”

Salter is survived by a wife and three children; all of whom have largely avoided interviews.

His son, Aaron Salter III; spoke to the Daily Beast shortly after the shooting. He said; his father’s death was “a shock,” but that he was also a “hero.”