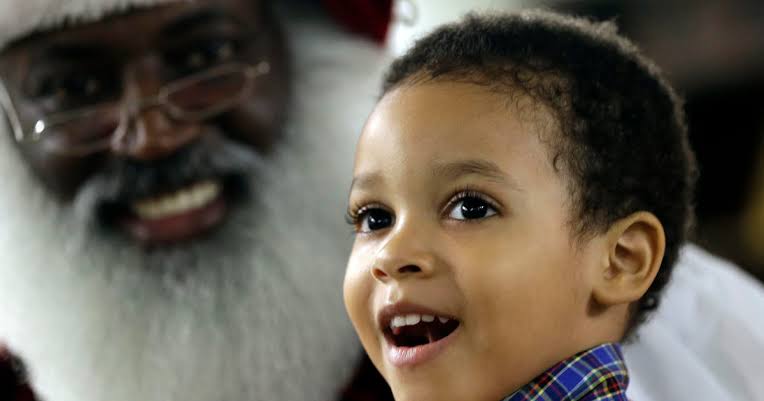 It is the Holidays/Christmas Season and it’s that time for the year when children just want to meet and greet the gift bearer from the North Pole. Most Times Black children are unable to relate with Caucasian Santas. Most parents too, want their children to value their color and it may be hard to find Black Santas for their children.

Citing studies that show that children with a positive attitude about their own racial identity do better in school and are less likely to engage in risky behavior.

After years of black parents seeking Black Santas so their children can get to meet a Santa that looks like them, a Texas woman invents App that helps Black Parents find black Santas.

According to CBS News, last year Jihan Woods, who is a physician and a mother of twin boys, started a Kickstarter campaign to help fund her Black Santa locator app. She was able to raise $5,000 within a span of 30 days, and the result was an app called “Find Black Santa,” which lists Santas in 35 states, and Washington D.C.

Although, the idea of having a racially diverse concept of the beloved figure that children are taught resides in the North Pole has stirred controversy. Last week, a blackSanta riding in a parade in St. Cloud, Florida, drew some verbal sparring on social media.

Jihan talked about her development of the app and said, “I really wanted my children to see a Santa Claus that looks like them. It’s important to me that they experience diversity in all aspects of their lives, Santa included.”

Terri Lipsey Scott, the executive director of Dr. Carter G. Woodson African American Museum in St. Petersburg, FL said that families have driven close to an hour just to take a photo with the black Santa at their location. Scott said, “The turnout is incredible — there are so few options as it relates to the availability of having an African-American Santa. That self-esteem element even in the holiday season is so important.”