AFRICAN FOLK TALES: A CAPTIVATING TALE OF THE KING, THE GREEDY TORTOISE AND THE DRUM. 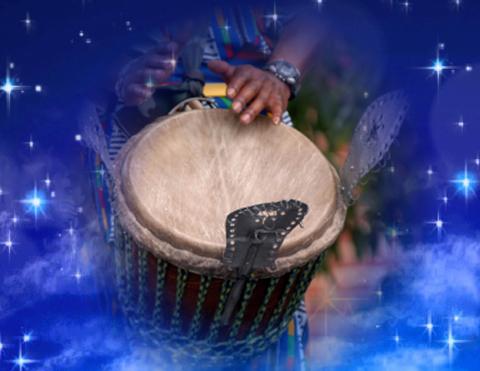 The King, The Greedy Tortoise And The Drum: Folk tales are traditional beliefs, myths, customs, and stories, relating to a community; or a group of people; it is passed through generations, by word of mouth.

Today on our folk tales, we present to you a west African folk tales; “The King, The Greedy Tortoise And The Drum.”

The King had a wonderful drum that once beaten, it provides plenty of good food and drink. So whenever any country declared war against him, he used to call all his enemies together and beat his drum; then to the surprise of every one, instead of fighting the people found tables spread with all sorts of dishes; fish, finger foods, soup, cooked yams and all sorts of drinks, for everybody. He was able to retain sanity in his kingdom and keep his enemies away. But there’s a rule and consequences. If the owner of the drum walked over any stick on the road or stept over a fallen tree, all the food would immediately go bad; and three hundred men would appear with sticks and whips and beat the owner of the drum and all the invited guests very severely.

Once in few months, the king issues invitations to all his subjects to come to a big feast, even the wild animals were invited; the elephants, hippopotami, leopards, bush cows, and antelopes were all invited; in those days, humans and animals relate. All the people and the animals as well were envious of the king’s drum and wanted to possess it, but the king would not part with it.

One morning, Ikwor one of the king’s wives, took her little daughter down to the spring to bathe her, as she was covered with sores all over her body. The tortoise happened to be up a palm tree, just over the spring, cutting nuts for his midday meal; and while he was cutting, one of the nuts fell to the ground, just in front of the child. The little girl, seeing the good food, cried for it, and the mother, not knowing any better, picked up the palm nut and gave it to her daughter. The Tortoise saw this, he climbed down the tree, and asked the woman where his palm nut was. She replied that she had given it to her child to eat. Then the tortoise, who very much wanted the king’s drum, thought he would make plenty trouble over this and force the king to give him the drum; so he said to the mother of the child:

“I am a poor man, and I climbed the tree to get food for myself and my family. Then you took my palm nut and gave it to your child. I shall tell the whole matter to the king, and see what he has to say when he hears that one of his wives has stolen my food,” for this, as every one knows, is a very serious crime according to native custom.

Ikwor Edem then said to the tortoise—

“I saw your palm nut lying on the ground, and thinking it had fallen from the tree, I gave it to my little girl to eat, but I did not steal it. My husband the king is a rich man, and if you have any complaint to make against me or my child, I will take you before him.”

So when the queen had finished washing her daughter at the spring, she took the tortoise to the king, and told him what had taken place. The King then asked the tortoise what he would accept as compensation for the loss of his palm nut, and offered him money, cloth, kernels or palm-oil, all of which things the tortoise refused one after the other.

The king then said to the tortoise, “What will you take? You may have anything you like.”

And the tortoise immediately pointed to the king’s drum, and said that it was the only thing he wanted.

In order to get rid of the tortoise the king said, “Very well, take the drum,” but he never told the tortoise about the bad things that would happen to him if he stept over a fallen tree, or walked over a stick on the road. 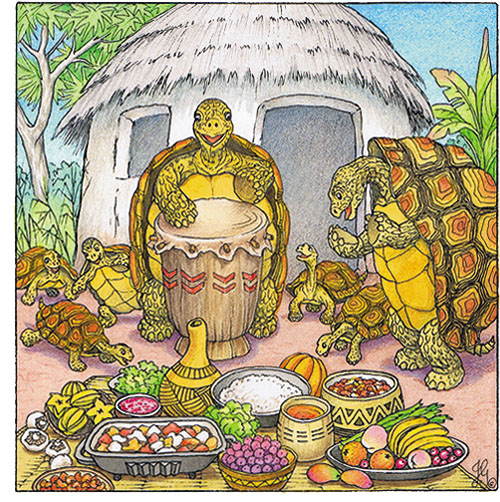 TORTOISE AND HIS FAMILY

The tortoise was very glad at this, and carried the drum home in triumph to his wife, and said, “I am now a rich man, and shall do no more work. Whenever I want food, all I have to do is to beat this drum, and food will immediately be brought to me, and plenty to drink.”

His wife and children were very pleased when they heard this; and asked the tortoise to get food at once, as they were all hungry. This the tortoise was only too pleased to do, as he wished to show off his newly acquired wealth. So he beat the drum in the same way as he had seen the king do when he wanted something to eat, and immediately plenty of food appeared, so they all sat down and made a great feast. The tortoise did this for three days, and everything went well; all his children got fat, and had as much as they could possibly eat.

He was therefore very proud of his drum, and in order to display his riches he sent invitations to the king and all the people and animals to come to a feast. When the people received their invitations they laughed, as they knew the tortoise was very poor, so very few attended the feast; but the king, knowing about the drum, came, and when the tortoise beat the drum, the food was brought as usual in great profusion, and all the people sat down and enjoyed their meal very much. They were much astonished that the poor tortoise should be able to entertain so many people, and told all their friends what fine dishes had been placed before them, and that they had never had a better dinner. After the feast the villagers looked upon the tortoise as one of the richest men in the kingdom, and he was respected. No one, except the king, could understand how the poor tortoise could suddenly entertain so lavishly; but they all made up their minds, that if the tortoise ever called for another feast, they would not refuse again.

When the tortoise had been in possession of the king’s drum for a few weeks, he became lazy and did no work, but went about the country boasting of his riches. One day, after drinking a lot of wine from the drum, he stood up to go home walked over a stick on the path. The bond got broken at once. But he did not know this, as nothing happened at the time. He got home, threw the drum to a corner and went to sleep.

When he woke up in the morning the tortoise began to feel hungry, and as his wife and children were calling out for food, he beat the drum, expecting food to proceed; but the house was filled with fearsome men, all armed with long sticks and whips; tortoise and his family were beaten to stupor.

At this the tortoise was very angry, and said to himself— “I asked every one to a feast, but only a few came, and they had plenty to eat and drink. Now, when I want food for myself and my family, the fearsome men came and beat me. Well, I will let the other people share the same fate, as I do not see why I and my family should be beaten when I have given a feast to all people.”

He therefore at once sent out invitations to all the men and animals to come to a big dinner the next day at three o’clock in the afternoon.