After The Death of Her Husband,Billionaire Widow, Jacqueline Mengi Becomes Richest Woman In East Africa. 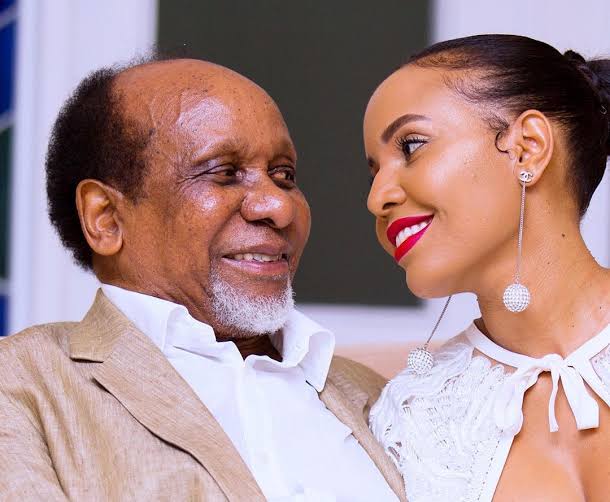 From a Singer, to a Beauty Queen, then a Billionaire Wife and Mother, and currently a billionaire widow, business woman and humanitarian, Jacqueline Mengi has gone through several metamorphosis.

The 40 year old widow of Late Tanzanian Billionaire Reginald Mengi, started off her career as a singer in 1997 with her stage name K-Lynn, she then became Miss Tanzania in year 2000 before getting married to Reginald Mengi in 2015 with whom she has twin sons.

It is said that she sang her way into the billionaire’s heart and was accused of snagging Reginald’s wealth, however she and her late husband insisted it was pure true love as they had both met in the United Kingdom where she was on a music tour. Their lavish wedding ceremony took place in Mauritius in 2015 and Jacqueline took up the role of a wife, leaving behind her careers in modelling and singing.

Jacqueline described her marriage as one of total bliss and Mengi as a sweet loving and caring man.

“My husband is very kind and apart from being the man I love, he is my friend and adviser in matters business and life in general,” she said.

The couple appeared to have been head over heels in love going by the messages they exchanged during Jacqueline’s birthday in 2018.

Mr Mengi tweeted, “My love, my darling wife, my best friend, the holder of the key to my life, it is always ‘better late than never’. Happy birthday, my Baby. Thank you for giving me a reason to live. I love you crazy [sic].”

She responded, “This is so sweet, ‘hubby’, I love you so much. I couldn’t have asked for a better man to be my everything.”

In March, Mengi again took to social media to wish his wife a happy wedding anniversary, thanking her for making it an exciting journey full of love and happiness.

He ended the tweet by declaring undying love for her.

Reginald Mengi sadly died on the 2nd of May, leaving his wife Jacqueline Mengi with his business empire.

He also owned Bonite Bottlers, the sole bottler of Coca-Cola products in the northern zone of Tanzania, the Kilimanjaro brand of bottled water and IPP Resources Company that mines gold, uranium, copper, chrome and coal.

Jacqueline has dedicated most of her life to charity work through her Dr Ntuyabaliwe Foundation, whose mission is to transform the lives of children in low-income communities through literacy campaigns. She is an award-winning furniture designer and also the chairman of Amorette Ltd, Furniture Design company.

Mengi’s death has seen her make the headlines, having been left with twin boys and immense wealth to look after. Mengi was considered one of the richest people in Tanzania with a net worth of $560 million (Sh1.2 trillion), according to Forbes Magazine’s 2014 list of the 50 richest people in Africa.