After White Supremacist Were Caught Making Propaganda Ad At The Site, Emmett Till Memorial Draws In More Donations 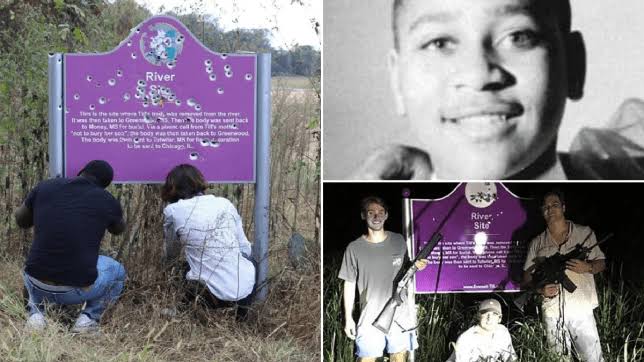 Emmett Till’s memorial site has gone through all kinds of vandalism in the past years, the latest being a group of white supremacist making a propaganda video at the site.

Over the weekend, a video released by the Emmett Till Interpretive Center showed a group of white supremacists caught fleeing the #EmmettTill memorial after they triggered an alarm at the site. They apparently were trying to shoot a racist propaganda ad using the memorial. Earlier in July the memorial had to be made bullet proof after it was vandalized with bullets by racists.

After the video was released, the executive director at the Emmett Till Memorial Commission told CBS News today that they have received more than $10,000 in donations since Saturdays incident.

In the video, There was at least eight people standing in front of the bulletproof marker, with two women filming while two men hold up Confederate flags. A man can be heard saying “We are all here at the Emmett Till monument that represents the civil rights movement for blacks. What we want to know is where are all of the white people?”

One of the flags appeared to belong to the “League of the South,” a hate group that “advocates for a white-dominated, independent South,” according to the Anti-Defamation League.

The Emmett Till Interpretive Center thanked the racists for “reminding us why this work matters” and asked people for donations.

The center’s executive director Patrick Weems said the donations will go toward the Emmett Till Memory Project. The funds will help create a permanent memorial at the river site, according to Weems.

The Emmett Till Memorial is a symbol of Civil Rights Movement.