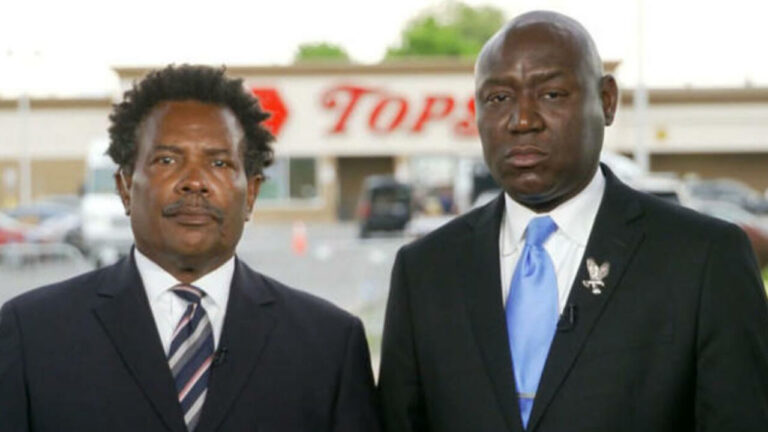 According to The Guardian; attorney Benjamin Crump; is now representing one of the families of the victims killed by 18-year-old; Payton Gendron. He is now officially representing the family of Ruth Whitfield, 86; who was killed in the weekend shooting.

Whitfield was one of 10 people killed; when the white supremacist; targeted Black victims at the Tops Supermarket on Saturday. And Crump demands that authorities treat this as an “act of domestic terrorism.”

“We can’t sugarcoat it; we can’t try to explain it away; talking about mental illness.” No, this was an act of domestic terrorism; perpetrated by a young white supremacist.”

Benjamin Crump; has also stated that; this means that; federal legislators must now pass; the George Floyd Justice in Policing Bill; which is currently before Congress. The bill is currently stalled; and he believes that the president; must use his influence to ensure that it is signed.

“Black America; is suffering right now,” he said. “And we need to know that; our top leader in America; reacts and responds when we are hurt.”

While the president and his wife were in Buffalo yesterday; the US Justice Department; is looking into the incident as; a hate crime and an act of racially motivated violent extremism.

Erie County Sheriff, John Garcia; revealed that Gendron was visited by state police last year after completing a high school project about murder-suicides. Buffalo police have also stated that; they are investigating a 180-page manifesto that Gendron wrote and posted; which references racist replacement theories.

“He was going to get in his car; and drive down Jefferson Avenue; and do the same thing.” The commissioner explained.

Our hearts go out to the families of all victims.

Michigan Police Officer Who Killed Patrick Lyoya Has Been Fired