Banyankole: The Ugandan Tribe That Tests The Groom’s Sexual Prowess Before Marriage 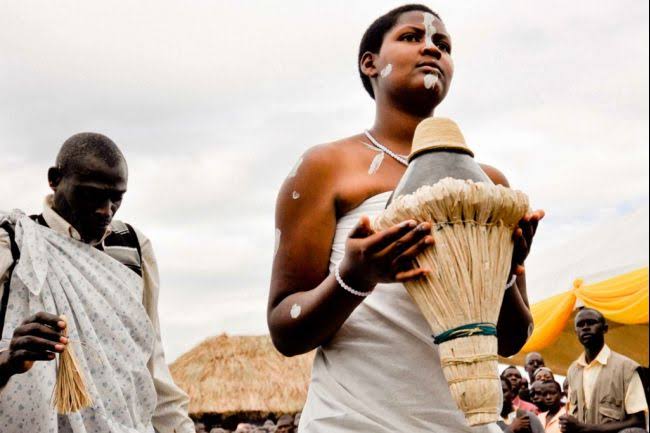 Marriage is a sacred institution in Africa, therefore there are varying rituals and steps that are being taken before a marriage is finalized. Different parts of Africa observe varying marriage traditions; the Banyankole of Uganda inculcate sexual prowess checks to be sure the groom is equal to the task. The brides aunty sleeps with the groom to ascertain that.

In many African cultures, aunties provide counseling to their young nieces as they age from adolescence to adulthood. In other cultures as seen in Nigeria, Aunties have little or no influence on their nieces/ nephews. When it comes to marriage, these aunties prepare their nieces for the challenges that lie ahead.

But for the Banyankole people in Southwestern Uganda, the aunt does more than the above, especially during the marriage.

When a couple prepares for marriage; the primary responsibility of the bride’s aunt is to carry out a sexual check on both her niece and her nephew-in-law. Essentially, the aunt does this by having sex with the groom to check his potency and virility.

She also has to “test” if the bride is still a virgin before they are allowed to consummate their marriage.

In other traditions, the aunt is said to go as far as listening in or watching as the bride and groom have sex in order to prove the couple’s potency.

In as much as this practice may sound weird, it shows how the people of Banyankole hold virginity in high esteem.

As soon as a Banyankole girl is eight, she goes through a lot of restrictions to prepare her for marriage.

When other children her age in other cultures are out having fun and playing; a girl in this part of Uganda is mostly kept indoors, where she is fed beef and millet porridge and forced to drink milk in large quantities so that she becomes fat.

“Being fat is synonymous with beauty among the Banyankoles”.

When she starts developing breasts, she is also asked by her parents to abstain from sexual activities.

It is the duty of a Banyankole father to find a wife for his son as he pays the bridewealth as well. This consists of some cows, goats, and lots of beer, depending on how rich a person is.

Once the bride price is paid, the marriage preparations begin. On the wedding day, there is a lot of feasting at the bride’s home, where the father is expected to slaughter a bull.

At the bridegroom’s home, there is another feast where the marriage is consummated. This is after the bride’s aunt has “tested” her niece’s purity and slept with the groom to also check his potency.

The Banyankole are located in southwestern Uganda. At the turn of the nineteenth century they numbered about 400,000 people. This former kingdom is well known for its long-horned cattle, which were objects of economic significance as well as prestige. The Mugabe(King) was an absolute ruler. He claimed all the cattle throughout the country as his own. Chiefs were ranked not by the land that they owned but by the number of cattle that they possessed. Banyankole society is divided into a high-ranked caste (social class) of pastoralists (nomadic herders) and a lower-ranked caste of farmers. The Bahima are cattle herders and the Bairu are farmers who also care for goats and sheep.

BanyAnkole lies to the southwest of Lake Victoria in southwestern Uganda. Sometime during or before the seventeenth century, cattle-keeping people migrated from the north into central and western Uganda and mingled with indigenous farming peoples. They adopted the language of the farmers but maintained their separate identity and authority, most notably in the Kingdom of Ankole. The country was well suited for pastoralism (nomadic herding). Its rolling plains were covered with abundant grass. Today, ideal grazing land is diminishing due to a high rate of population growth.

The Banyankole speak a Bantu language called Runyankole. It is a member of the Niger-Kordofanian group of language families. In many of these languages, nouns are composed of modifiers known as prefixes, infixes, and suffixes. Word stems alone have no grammatical meaning. For example, the prefix ba-signifies plurality; thus, the ethnic group carries the name Banyankole. An individual person is a Munyankole, with the prefix mu-carrying the idea of singularity. Things pertaining to or belonging to the Banyankole are referred to as Kinyankole, taking the prefix ki-. The pastoral Banyankole are known as Bahima; an individual of this group is referred to as a Muhima. The agricultural Banyankole are known as Bairu; the individual is a Muiru.

The Banyankole Bahima herders consume milk and butter and drink fresh blood from their cattle. The staple food of a herder is milk. Beef is also very important. When milk or meat are scarce, millet porridge is made from grains obtained from the Bairu. Buttermilk is drunk by women and children only. When used as a sauce, butter is mixed with salt, and meat or millet porridge is dipped into it. Children can eat rabbit, but men can eat only the meat of the cow or the buffalo. Herders never eat chicken or eggs. Women consume mainly milk, preferring it to all other foods. Cereals domesticated in Africa—millet, sorghum, and eleusine—dominate the agricultural Bairu sector. The Bairu keep sheep and goats. Unlike the herders, the farmers do consume chickens and egg.

In 1967, the government of Milton Obote, prime minister of Uganda, abolished kingdoms in Uganda, including the Kingdom of Ankole. This policy was intended to promote individualism and socialism in opposition to traditional social classes. Nevertheless, cattle are still highly valued among the Banyankole, and the Bahima are still held in high regard. Social events such as weddings, funerals, and birthday parties typically involve music and dance. This form of entertainment includes not only modern music, but also traditional forms of songs, dances, and instruments. The drinking of alcoholic and nonalcoholic bottled beverages is common at festivities. In the past, the brewing of beer was a major home industry in Ankole.