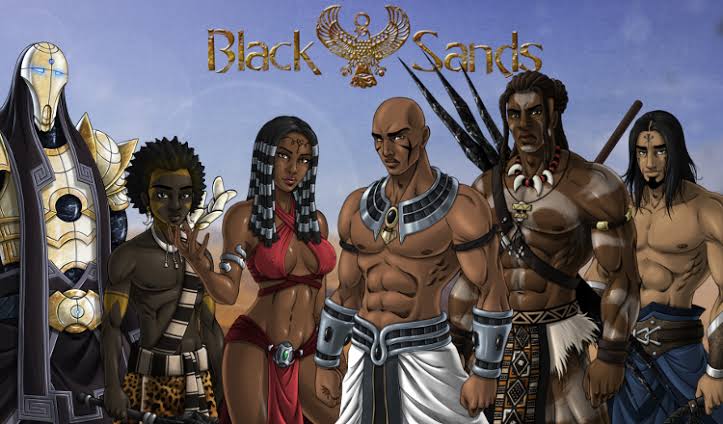 Founded by Manuel Godoy and his wife, Geiszel Godoy, Black Sands Entertainment; is a Birmingham, Ala., startup publisher focused on releasing comics, chapter books, and picture books aimed at black parents and their children. The Godoys are military veterans; (though they met after leaving the military). And they work together to guide the company as well as produce much of its content.

In addition, the house publishes Sons of Nibiru; a series of prose sci-fi/fantasy novellas also set in the Black Sands’ fictional pharaonic African kingdom. Both series are written by Manuel Godoy, with art for the comics and illustrations for the novellas provided by David Lenormand.

Black Sands also publishes Mori’s Family Adventures; an ongoing series of picture books by Geiszel Godoy and Lenormand that follows a modern African-American family as they travel around the world learning about local culture.

The first book, Mori’s Family Adventures: South Africa, is the story of a trip to South Africa, and the new book is Brazilian Culture Exchange by Geiszel Godoy with art by Huan Lim, which follows the family on a trip to Brazil. Black Sands has just added a coloring book based on the series: Mori’s Family Adventures World Traveling Coloring Book, Vol. 1.

Since its launch in late 2017; the company has sold more than 11,000 copies of the comics, novella, and picture books combined. It sells all of its books, comics, and picture books, as well of a variety of merchandise based on its titles, through its online store; and it has just reached an agreement with Baker & Taylor to distribute its titles to the book trade.

According to the founder; “We tell stories that Hollywood refuses to do and we give the power to the fans; This company has succeeded where so many other independent black-owned publishers had failed because we embrace our core customer.

While many other companies try to stay neutral in their PR, Black Sands has always spoken on black issues affecting the community and the publishing industry; Black Sands, the Seven Kingdoms is an open rebellion against typical Hollywood whitewashing and it is by far the most successful indie comic series out there right now. Why is that? Because the black community made it happen”.

Our history must be told by us.