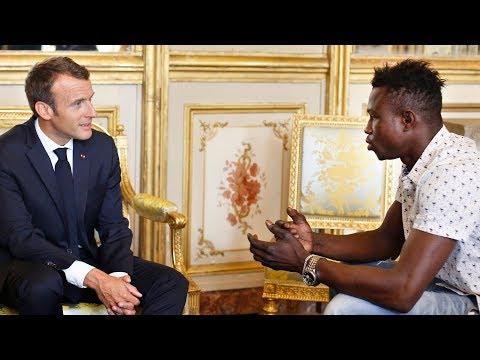 HERE’S A SUPERHERO BABY DADDY FOR YOU LADIES, GET HIM BEFORE HE’S TAKEN.

MALIAN IMMIGRANT RISKS LIFE TO SAVE CHILD HANGING ON A BALCONY

Ladies you may want to rethink your choice of baby daddy and get this spiderman dude here.

Get a baby daddy that loves children and can put his life at risk for them without considering the race, like this handsome black man. if this is your baby daddy then consider yourself and your babies safe at all times even when you try to fall down from a mountain, he’ll come running to get ya in one minute!

Mamoudou Gassama risked his life and the ability to live in his adopted home of France after performing one of the bravest acts ever seen. Gassama scaled a Paris apartment building to rescue a toddler who was hanging from a balcony and has been rightfully rewarded with citizenship in France and a job with the country’s fire service.

As reported by The Guardian, the man the French press has dubbed “le Spiderman” is an undocumented immigrant from Mali who climbed four stories on the side of the building to rescue the child. Despite the risk of deportation and injury, Gassama leaped into action without fear.

Footage of the rescue shows Gassama, 22, pulling himself up the building’s storeys from balcony to balcony as a man on the fourth floor tries to hold on to the child by leaning across from a neighboring balcony.

On reaching the fourth floor, Gassama puts one leg over the balcony before reaching out with his right arm and grabbing the child.

Firefighters arrived at the scene to find the child had already been rescued.

“Luckily, there was someone who was physically fit and who had the courage to go and get the child,” a fire service spokesman said.

Tracked down by reporters 24 hours after the rescue, Gassama said he had acted without thinking. “I saw all these people shouting, and cars sounding their horns. I climbed up like that and, thank God, I saved the child,” he said.

“I felt afraid when I saved the child … [when] we went into the living room, I started to shake, I could hardly stand up, I had to sit down,” he added.

Gassama received praise from Paris Mayor Anne Hidalgo and met with French President Emmanuel Macron who offered the hero a path to citizenship and the fire service job offer.

The news has been one of the best feel-good stories of the weekend, and the response online has been nothing short of joyous for good reasons.

#MamoudouGassama—the Malian Muslim Spiderman—rescues a toddler w/o hesitation. Mamoudou is an undocumented immigrant—he knew getting caught would mean deportation

Macron is awarding him citizenship.

“To save one is to save all humanity.”—Quran & Torah

from illégal immigrant to citizenship with a job without even demanding . That’s Gods grace .

‘Spider-Man’ of Paris – Without a thought for his own safety, #MamoudouGassama a 22 Malian undocumented man has been hailed a hero after he scaled the facade of a building to save a four-year-old child hanging from a fourth-floor balcony.https://www.theguardian.com/world/2018/may/28/spider-man-of-paris-climbs-four-storeys-to-rescue-dangling-boy?CMP=share_btn_tw …

Footage shows Mamoudou Gassama, a Malian immigrant, climbing up to a fourth-floor balcony to bring the child to safety