Capitalist Jay-Z, Sham NFL And Hidden Agenda Of The Workout Of Colin Kaepernick 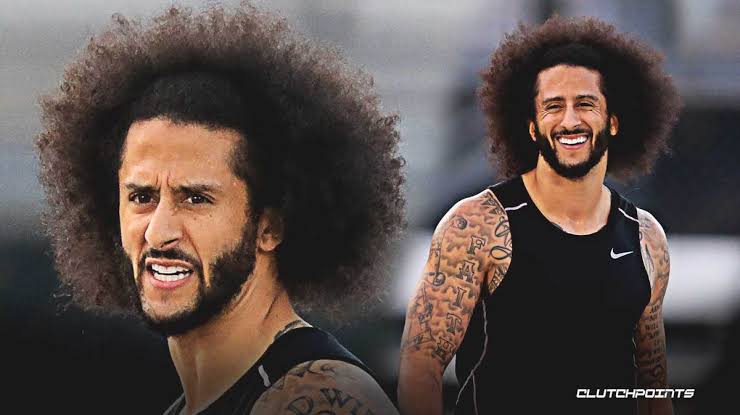 Ever since it was announced that Embattled Quarterback Colin Kaepernick who has been described by analysts of his recent work out which took place on Saturday as tweeted by ESPN reporter that an NFL executive “said his arm talent is ‘elite’ and is the same as when he came out of college—he threw the ball well”, several revelations have been brought to light on the motives of the NFL concerning Colin Kaepernick’s Work out and the sinister motive to shut Colin Up.

Colin Kaepernick wore a kunta kinte Jersey during the work out to further buttress his stance on the treatment of blacks in America and also to show that he would not back down on the fight against injustice, just Incase the NFL are thinking that offering him a work out which has been described as a Trojan horse would make him quit his voicing out.

Kaepernick wore the T-shirt bearing “Roots” character Kunta Kinte’s name, likely to make a stance. The enslaved African was portrayed by LeVar Burton in the 1977 miniseries and refused to be acknowledged by his slave name, Toby. It famously resulted in him getting whipped for repeatedly disobeying his master. Colin is letting NFL know that he is keeping up his stance.

Senior NFL Reporter for Yahoo! Sports Charles Robinson, breaks down on theJim Rome Show the politics that was being played by the National Football League. Robinson mentions how the NFL has a tendency to dictate the narrative as they please. He also touches on how when the Roc Nation/ NFL deal was set-up in New York how the league simply notified Jay-Z’s camp to show up. Apparently, the League tried this same approach with Kaepernick but in the end were seemingly outmaneuvered by the free-agent quarterback. Robinson goes on to call the combine-like workout a “Trojan horse.” Importantly, Robinson also discusses the nature of the “waiver” being presented to Kaepernick.

The issue that led to the impasse was the NFL’s insistence that Kaepernick sign an “unusual” waiver. Kaepernick has reportedly been mulling a collusion lawsuit against the NFL. Contrary to popular belief, Kaepernick has never challenged the NFL in a court of law. While news outlets have called Kaepernick’s previous settlement a “lawsuit,” it was technically an NFL Players Association grievance that was settled through arbitration, as required by the NFLPA union contract.

According to Sports Illustrated, rapper, NFL partner and heralded capitalist, Jay-Z was “disappointed with Colin’s actions and believes he turned a legitimate workout into a publicity stunt.” Of course, Sports Illustrated didn’t name its “sources” but some have speculated that the quote came from the Official Entertainment Minstrel of the National Football League: Shawn Corey Carter.

According to Roots, “But if I did compare the NFL to a plantation, then Jay-Z would probably insist that working for Massa is better than freedom”

Jay,Z has been described as a sell out, based on the stipulations contained in the waiver that the NFL expected Colin Kaepernick to sign.

ProFootballTalk’s Mike Florio, who is also a lawyer, reports:

The three-page, 13-paragraph documents contains several specific provisions that could be relevant to the question of whether the NFL was trying to parlay the waiver into a release of any claims for collusion/retaliation that Kaepernick could make as a result of his ongoing unemployment by the league since settling his first collusion case in February…

If I were representing Kaepernick, and if the goal were to have a genuine workout aimed at enhancing his chances of being signed by an NFL team, I would have asked immediately for the document to be revised to specifically clarify that any and all potential employment rights would be preserved. If the league had refused, I wouldn’t have signed it, because the language leaves the door sufficiently ajar for a subsequent defense to a collusion/retaliation case that signing the waiver extinguished the claims.

Kaepernick’s Nov. 16 workout was initially set to take place at the Atlanta Falcons’ training facility in Flowery Branch, Georgia, about 45 miles north of Atlanta, but 20 minutes before it was set to occur the Atlanta Journal-Constitution reported the venue moved to Charles Drew High School in the south metro Atlanta suburb of Riverdale.

Apparently, Kaepernick’s representatives took issue with the pre-arranged work out set up by the NFL as well as conditional insurance claims and lack of media access.

While all 32 NFL teams had been invited to Kaepernick’s workout, The Associated Press reported only eight were there.

After Kaepernick switched venues for the two-hour workout, he issued a waiver that had drastically different stipulations compared to the document the NFL handed out previously. Sports Illustrated reported a key differencewas Kaepernick assuming the risk of physical injury.

The 24 NFL teams who did not send reps to the workout need not worry. Kaep sent all 32 teams videos of his training session. TMZ Sports reported the video, which had been live-streamed on YouTube, was completed within 24 hours and was accompanied by a note explaining he’s ready and open to visit with any team to interview with the typical option to work out if serious interest is generated.