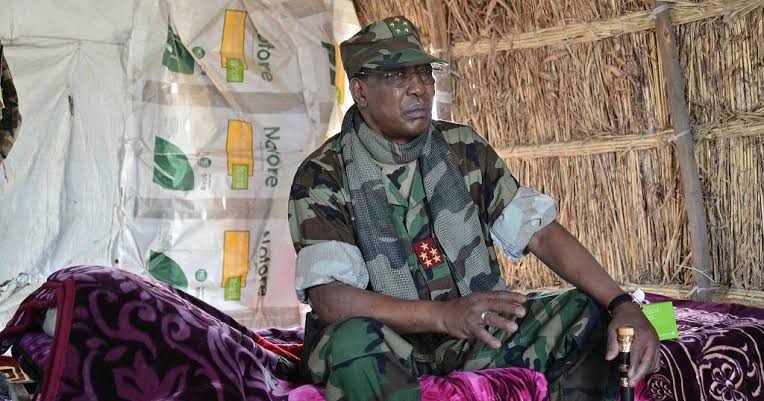 The three decade long president of Chad, Idriss Deby has died. He was 68 years old. Known as a fearless army commander, who loved to visit his soldiers in the battlefield against rebels; Idriss Deby died from injuries sustained from rebel troops after they attacked the Chadian army; during the President last visit to the fore battle front.

The Chadian Army Spokesman, General Azem Bermandoa Agouna; said in a statement that was read out Tuesday on state television, that Deby; “has just breathed his last defending the sovereign nation on the battlefield” a day after Deby was declared the winner of a presidential election.

Agouna also said a military council led by the late president’s 37-year-old son; four-star General Mahamat Idriss Deby, would replace him. A curfew has been imposed and the country’s borders have been shut in the wake of the president’s death.

According to Aljazeera, The exact circumstances of Deby’s death were not immediately clear. The army said the president had been commanding his army at the weekend as it battled against rebels; who had launched a major incursion into the north of the country on election day on April 11.

The shocking announcement came a day after Deby, who came to power in a rebellion in the year 1990; recently won a sixth term. Provisional results released on Monday showed that Deby had taken 79.3 percent of the vote.

Idriss Deby however postponed his victory speech to supporters and instead went to visit Chadian soldiers battling rebels; according to his campaign manager. And he never returned alive.

The rebel group Front for Change and Concord in Chad (FACT), which is based across the northern frontier with Libya, attacked a border post in the provinces of Tibesti and Kanem on election day and then advanced hundreds of kilometres south.

Idriss Derby had remained a great soldier and had been very instrumental in the fight against bokoharam and other insurgents linked to ISIL and Al Qaeda.

This is a great and shocking loss.