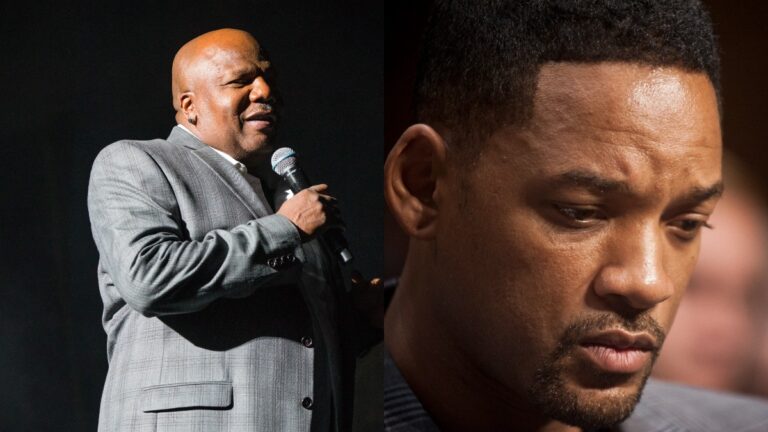 Earthquake, an American actor and stand-up comedian, has more thoughts on Will Smith and Jada Pinkett Smith’s marriage.

In a recent interview on NFL Hall of Famer Shannon Sharpe’s podcast, “Club Shay Shay,” Earthquake, expressed his belief that Smith’s love for his wife is not reciprocated.

When asked directly if she loves Will Smith, Earthquake said flatly, “Fu*k no.” The stand-up comic’s remarks are directly related to Smith’s explosive presence at this year’s Oscar ceremony.

Chris Rock, who was on hand to present the documentary feature award, joked that Pinkett Smith’s shaved head, a result of her alopecia, was similar to actress Demi Moore’s in the film “G.I. Jane.”

Read more: Dave Chappelle Reveals He Spoke To Isaiah Lee, To Find Out His Motivation For Attacking Him

While Smith initially laughed at the joke, his wife’s displeasure apparently prompted him to angrily approach the stage and slap Rock. He then returned to his seat, only to yell, “keep my wife’s name out of your fu**ing mouth!” In terms of Earthquake, Pinkett Smith should have stopped her husband out of love and protection rather than allowing things to escalate. Instead, the inverse occurred.

Following the “slap seen around the world,” the couple has been bombarded with reports that a divorce is imminent, Smith has been condemned, and the actress has been vilified for dragging their marriage to the “Red Table Talk.”

When Sharpe asked if Smith would be happier divorced, Earthquake said the actor had a difficult truth to accept. . “I think Will will be happy once he comes to the realization that you in love with a woman that don’t love you and no matter what you do or what you give or what you achieve it’s not going to be sufficient.”

“A lot of women settle,” he went on. He is not the man of her dreams and she constantly throw it in his face; that’s why she bring up Tupac.” The comic then alluded to a contentious letter supposedly written by the couple’s daughter, Willow, in which she expressed how much her mother missed the late rapper with whom she had a deep connection. “Got his daughter sitting there: ‘Please come back Tupac. I love you a lot so me and mommy could be happy.”

The actress has been open about her feelings for Tupac and the grief she has experienced in the years since his death in 1996. As a result, her transparency has frequently made Smith the punchline of jokes and appeared to fans as her backup plan — all of which proves to the comic that Pinkett Smith does not love the Oscar winner. “When a woman loves you there’s certain lines they just won’t cross.”

Social media users had a variety of reactions to Earthquake’s take on the couple’s marriage.

“I agree. She prolly love him, but she def not in love with him! “They partnership just works,” someone wrote.

A message at the start of the current season of the actress’ popular Facebook Watch series suggested that the Oscars fiasco would be addressed at some point.

“They gonna be flipping that red table this season.”