Cop who killed Breonna Taylor, Has written A Book To Profit From Her Death 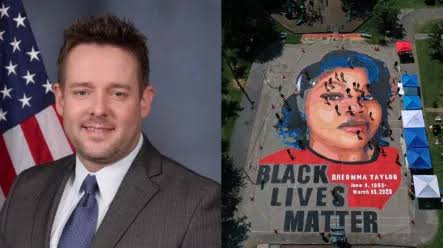 It’s been a year since the tragic death of Breonna Taylor, and amidst the still lingering pain; and one of the officers involved in her death is trying to make money off our collective grief.

Sgt. Johnathan Mattingly, one of the officers who shot and killed Breonna Taylor last year; is writing or has written a book about the incident.

According to the Courier-Journal, Mattingly is in the process of writing The Fight For Truth: The Inside Story Behind The Breonna Taylor Tragedy.” The book is being published by the Post Hill Press; a publishing company that specializes in printing pop-culture, self-help, health, and conservative political books.

The Courier-Journal reveals that they learned of the book when Mattingly contacted the journal; for permission to use a staff photo from the ensuing protests. Though the book was later set to be distributed by Simon & Schuster; however after fierce backlash, the publisher reversed course.

“Like much of the American public, earlier today Simon & Schuster learned of plans by distribution client Post Hill Press to publish a book by Jonathan Mattingly,” the publisher said in a statement. “We have subsequently decided not to be involved in the distribution of this book.”

It is not clear if Simon & Schuster backing out of the publishing will affect the release of the book. Louisville Rep. Attica Scott responded to the news on Twitter.

Sadly, None of the seven officers that were involved in the raid that killed Breonna Taylor were directly charged with her death. The Louisville Attorney General Daniel Cameron only charged one of the officers, Brett Hankison, with wanton endangerment. The wanton endangerment charge carries a five-year sentence and a $10,000 fine. Additionally, Three more officers were fired for their actions but were not charged.