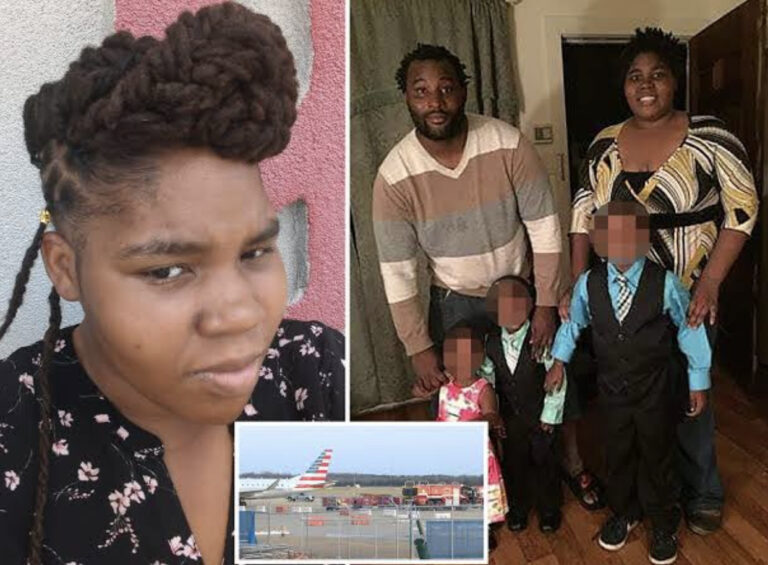 The ground handling mother of three employee  who died in the accident on New Year’s Eve at Montgomery Regional Airport has been identified as 34 year old Courtney Edwards.

According to a preliminary report from the National Transportation Safety Board released on Monday, she was employed as a ground handling agent by Piedmont Airlines, an affiliate of American Airlines.

The Alabama airport worker who was sucked into a plane engine was pulled in so violently that it shook the entire aircraft; killing her after she had been repeatedly warned to keep her distance, federal investigators found.

According to the report, just before she died, a coworker saw Courtney Edwards almost pushed over by a jet’s exhaust and tried to warn her to stay away until the engines were turned off.

Another ground worker on the other side of the Embraer E175 jet had backed away after a pilot leaned out the window and said the engines were still running.

But moments later, Courtney Edwards walked in front of one of the engines of the plane carrying an orange safety cone and was “pulled off her feet and into the operating engine,” according to the report.

A co-pilot stated the “airplane shook violently followed by the immediate automatic shutdown” after Courtney Edwards got sucked into the plane engine.

The flight, which was leaving from Dallas with 59 passengers and four crew members on board, was being operated by Envoy Air, an affiliate of American Airlines.

To make matters worse, an auxiliary power unit was not working, according to the safety board.

Pilots ultimately decided to leave both engines running for a two-minute engine cool-down period as they waited for the plane to be connected to ground power.

Meanwhile, the NTSB claim a safety meeting with ground crew members was held just 10 minutes before the flight’s arrival, which was followed by a second safety “huddle” just as the jet reached its gate “to reiterate that the engines would remain running.”

The transpiration agency added that no one should approach the plane until the engines were shut down and after the pilots turn off the beacon light.