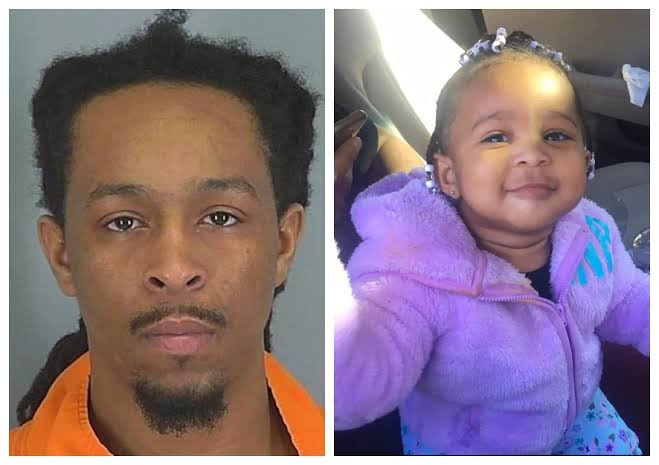 A South Carolina man, Imhotep Norman who left his 19-month-old daughter to die in a burning car; during a police chase in 2019, has been given 28 years in prison after pleading guilty.

USAToday reports; Imhotep O. Norman of Spartanburg was sentenced on Tuesday, according to the office of 7th Circuit Solicitor Barry Barnette. News outlets reported that officers tried to stop him for speeding in April 2019 as flames and smoke spewed from his car.

Instead, Norman drove over the median of Highway 14 and onto Interstate 85, where troopers forced him into the right lane. Then he jumped from the burning vehicle and as he ran away; a trooper saw him toss a backpack that held illegal drugs, the solicitor’s office said.

The toddler’s father, who was arrested hours after fleeing into the woods, told investigators he thought the pursuing officers would rescue her.

At a court hearing following the incident, Norman claimed the car;“wasn’t on fire” when he got out of it.

“It was going by itself,” Norman said. “I couldn’t hit the gas or the brakes or anything anymore. When I hit the brakes in it, I just kept going the same amount of speed.”

“I would have never got out the car while the car was on fire, I seen sparks coming from under the tires; when I tried to stop and I couldn’t stop at that point. I don’t know why what happened to the car were I couldn’t stop.” He continued.

The 28 year old Imhotep Norman, pleaded guilty to homicide by child abuse, failure to stop for a blue light and siren; and several drug charges. He will have to serve 85% of his sentence before he’s eligible for release, the solicitor’s office said.