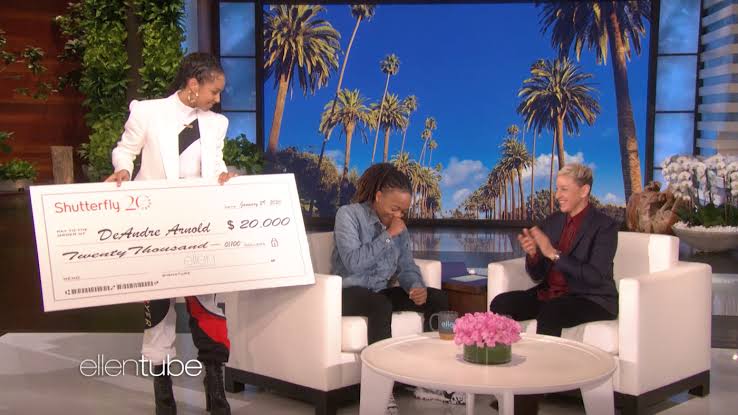 We previously reported the story of DeAndre Arnold the 18 year old who is being forced to cut his dreadlocks by his school else he would not graduate. DeAndre Stood firm and refused to be intimidated. Now, in a marvelous twist of events. Ellen DeGeneres has awarded him a whooping $20k Scholarship for his education.

According to NBC News, “Sandy Arnold (DeAndre’s mother) said after Christmas break, three months before graduation, the Barbers Hill Independent School District changed its dress code as it refers to hair. Now the rules stipulate “hair must be clean and well groomed” and not extend on male students, at any time, below the eyebrows, the ear lobes or the top of a T-shirt collage-including when let down.”

DeAndre Arnold appeared on Ellen Degeneres’ Wednesday’s show after his story was picked up nationwide. Just last week it was reported that the student also withdrew from Barbers High School because the school insisted he changed his appearance-by cutting his dreadlocks.

While appearing on her show, DeAndre Arnold stated, “Every day I would go to school, I would be in dress code. But the thing with them is, if it was let down, I would be out of dress code.

The talk show host replied, “I just personally think you should be able to wear your hair however you want, especially if there’s girls with long hair. What’s the difference if girls have long hair and if guys have long hair?”

DeAndre Arnold And His Culture

DeAndre Arnold also stated it was important to express his culture. He stated, “ It’s really important to me because my dad is from Trinidad. I really wish the school would kind of be open to other cultures and just, at least let us try to tell you some things. Don’t just shut us out.”

After the exchange, Alicia Keys presented him with the scholarship and stated, “ I want to tell you that I couldn’t believe the story when I heard it. And I’m super proud of you for standing up for what you know is right. And I know that the school needs to do the right thing.”

We are so happy for DeAndre! Good thing to stand up for yourself.