Donald Trump Tells Bubba Wallace To Apologize To His Fellow NASCAR Drivers, After He Said He Found A Noose In The Garage

Bubba Wallace made headlines after he found a rope inside a Talladega garage, which appeared to be tied like a noose.

Last month, members of Wallace’s team discovered the noose; which was found on the door of an infield garage stall assigned to the driver at Talladega Superspeedway in Alabama. 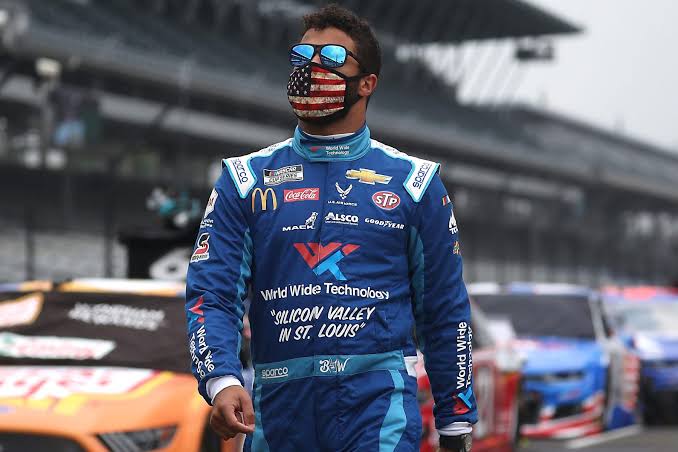 The following day, in a show of solidarity with Wallace, NASCAR drivers and teams pushed his No. 43 car down pit road at the speedway.

“I’m mad because people are trying to test my character and the person that I am and my integrity,” he said. “The conversation that I had with Steve Phelps was probably the one of the hardest things; if not the hardest things he had to tell somebody. Tears rolling down his face, choked upon every word that he was trying to say. That the evidence he had brought to me, that a hate crime was committed; and I immediately thought my family was in danger. So I was about to call my mom and dad and make sure everybody was okay.”

Wallace, who has been a vocal supporter of the Black Lives Matter protest movement; and had called for banning the Confederate flag from NASCAR events, has accepted the FBI’s conclusions about the incident.

Following Trump’s tweet on Monday, NASCAR reiterated its support for Wallace in a tweet of its own, saying: “We are proud to have Bubba Wallace in the NASCAR family and we commend his courage and leadership. NASCAR continues to stand tall with Bubba; our competitors and everyone who makes our sport welcoming and inclusive for all racing fans.”

Well, Donald Trump isn’t here for Bubba’s claim, and is calling for him to apologize. In a tweet, Donnie questions whether or not Bubba apologized; and calls the entire situation a “hoax”.

“Has Bubba Wallace apologized to all of those great NASCAR drivers and officials who came to his aid, stood by his side; & were willing to sacrifice everything for him, only to find out that the whole thing was just another HAOX? That & Flag decision has caused lowest ratings EVER!”