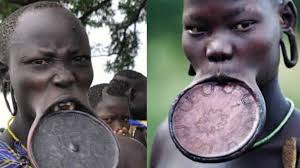 The Mursi tribe is one of the most fascinating tribes of Ethiopia. They became Ethiopian citizens in the nineteenth century. Unlike other tribes who have abandoned their traditions this tribe still holds theirs dearly. To date you will find them wearing traditional clothing and accessories.

This tribe also has a fascinating religion categorized as animism. They believe in a higher force (Tumwi) that’s said to be in the sky, often a rainbow or a bird. The Mursi tribe also worships a high priest often known as Komoru. This priest serves as a communicator between them and Tumwi. He also conducts rituals to fight diseases, bring rain and save them from enemies.

This tribe lives in huts called doris and does not allow inter-clan marriages. The Mursi tribe relies heavily on cattle for meat and milk. They also practice farming specializing in sorghum, beans and chickpeas. Farming however does not thrive in the Omo area where they live due to drought.

Unlike in most African cultures the bride’s family in this tribe is expected to hand over more than 38 cattle to the groom’s family.

Young women of the Mursi tribe wear the lip plates as a symbol of beauty and identity. Girls aged 15 or 16 have their lower lip cut by an older woman in the tribe (sometimes the mother) and held open until it heals.

The lip plates are mostly worn by unmarried girls and newlywed women. The expectation is that a man, whether a boyfriend or husband, will not have intercourse with the young woman until the lip has fully healed.

These beauty enhancers are worn on special occasions such as when serving men food, weddings and when milking the cows. Besides serving as a symbol of beauty these lip plates are meant to show adoration, commitment and respect to the husband. This is why young women will always wear them when serving food to their husbands.

In the event the husband dies the young woman is allowed to remove the lip plate. The Mursi tribe also wears these lip plates as a sign of identity. There are currently less than 10,000 Mursi tribe people left in the world.

The lip plates also work to tell the statuses of the young women wearing them as either single or married. Although the young women have a choice to decide on the size of the plate it’s always assumed that the larger the plate the more bride price the woman deserves.