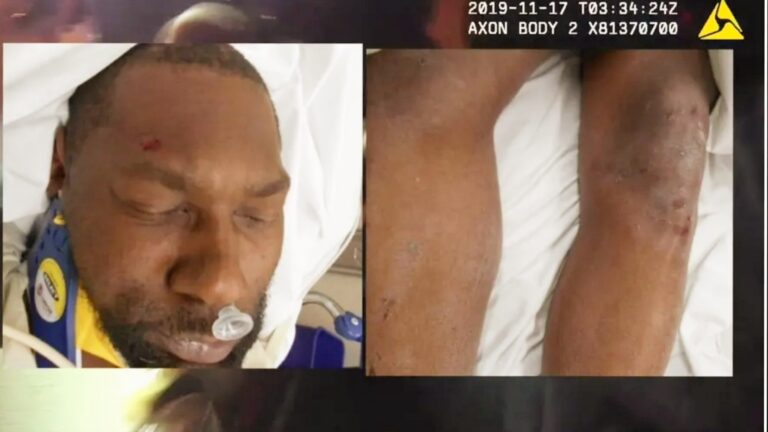 A Michigan man, Fahirri Dannah, has filed a federal lawsuit against the city of Grand Rapids and its police department; accusing them of using excessive force. His attorneys argue that the crime was racially motivated, asking, “Would this horror have happened if his skin had been white?”

On Thursday, April 28, Fahirri Dannah, 44, filed a claim in U.S. District Court accusing the Grand Rapids Police Department and five of its officers of violating his civil rights; after being beaten unconscious during a traffic stop in November 2019, that left him with brain damage, a cut on his head, and a dislocated shoulder.

The five officers named in the case are Anthony Barberino, Harvey Barker, Zachary Kaiser, Melissa Moninger, and Michael Spees. The case claims that the department officers are incorrectly educated and are not reprimanded for brutality. Although the lawsuit does not say that all of the officers were involved, the lawyer claims that no one followed protocol.

“We want to know why all those other police officers who were there, five officers, why no one did the right thing,” said Dannah’s attorney, Jon Marko. “Justice appears to entail holding people accountable for their conduct and, hopefully, bringing about some change in Grand Rapids.”

According to the lawsuit, “the deprivations (of Dannah’s constitutional rights) were caused by a series of purposefully callous policies, customs, and established practices by the City of Grand Rapids, including inadequate training.”

According to the lawsuit, Fahirri Dannah was not driving when the car was stopped for speeding down 11th Street and having an object dangling from the rearview mirror. He was sitting in the back seat of the car. The female driver of the car came to a halt and allowed cops to search it. She then went to the back of the officer’s patrol SUV, according to FOX 2.

According to the accusation, Fahirri Dannah refused to be searched when the cops ordered it. He believed the police had “no probable cause” to search him. “What exactly are you on about?” “I ain’t had no warrant,” Fahirri Dannah stated.

Despite the man’s protests, the officers insisted on “patting” him down to ensure he had no weapons. “Nope. Nothing compares to that.” “You’re not going to jail,” one of the officers said.

According to reports, “after several minutes of being harassed by the officers for no reason, Mr. Fahirri Dannah attempted to end the engagement.” Fahirri Dannah can be seen walking to the side with an officer whose bodycam isn’t recording. A scream can then be heard off-camera.

As a result, the officers raced over to him, grabbed him, and dragged him back to their cruiser. The officers then start slamming the man’s head against their patrol car. Even after he went unconscious, the officers beat him and threw him to the ground. Out of the three officers present, the female officer slammed her entire weight into the man, dislocating his shoulder. The other two, according to the lawsuit, “punched the defenseless Mr. Fahirri Dannah.”

“They took him to the ground abusively, causing significant injury and striking him,” Marko said. They knocked him out and charged him with cocaine use.”

While the Black man was still unresponsive, the cops handcuffed him and accused him of assault, violence, resisting arrest, impeding a police officer, and using cocaine. Toxicology testing would eventually prove this to be false.

The bodycam video that was released does not show any of the altercations that resulted in his injuries. According to the lawyer, the video was either destroyed, deleted, or still in police custody.

Fahirri Dannah was photographed in the hospital following the beating, indicating that something violent had taken place. Was it, on the other hand, a violation of his civil rights or the police code of ethics?

If a detainee continues to resist after verbal warnings, officers may use physical force, such as empty hand blows and kicks, according to the GRPD handbook of operations. Section 3-B of the use of force escalation and deescalation division states, “Escalation of force may be authorized when an officer reasonably judges that the degree of force being used is insufficient to quell or control the resistance.”

According to his lawyers, the altercation has caused Fahirri Dannah “severe bodily, emotional, psychological pain, and trauma.”

Marko took advantage of recent negative news about the GRPD. He mentioned Patrick Lyoya, a 26-year-old African immigrant who was shot in the back of the head by a police officer after his car was pulled over for an unregistered license plate.

Marko described his client’s case as “another tarnish on the Grand Rapids Police Department involving a minority suspect.”

“We have to ask the GRPD if this crime would have happened if his skin had been white,” he said in a statement released on Friday, April 29. “When is this going to end?” According to Marko, his client was distressed by the news of Lyoya’s death and now suffers from PTSD.

The employment status of the cops involved in the assault on Dannah is unknown, and they may still be on the force.