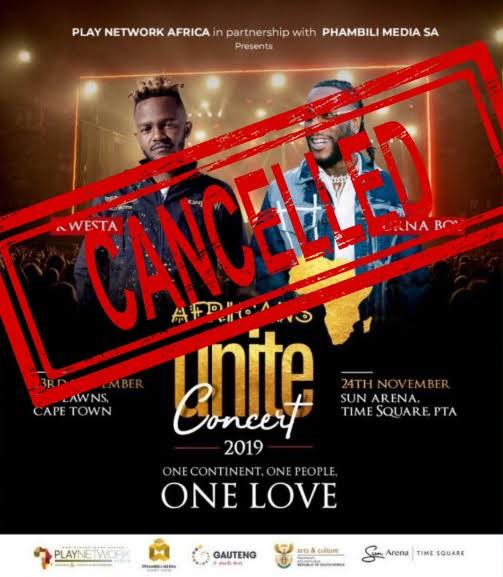 What set out to be a unification concert escalated quickly into squabbles and shameless show of disunity as South Africans in South Africa where the concert was scheduled to take place, kicked against the Burna Boy’s inclusion on the list of the performing acts.

The Grammy Nominated Artist has been embattled since he was announced as part of the artist to perform at the concert, which had him withdrawing from his scheduled performances at the now cancelled concert which was set to take place in South Africa.

Leading the protest against Burna Boy, is South Africa’s Rapper AKA who had collaborated with Burna Boy on his(AKA’s) Hit track “All Eyes on me”.

AKA and Burna Boy exchanged stern tweets during the xenophobic attacks which had Burna Boy telling AKA off.

The concert was supposed to encourage unity among Africans in the fight against xenophobia with part of the proceeds being donated to the victims of South Africa’s most recent xenophobic violence. However, following Burna Boy’s heated Twitter exchange with rapper AKA during those xenophobic attacks, South African artists have been gunning for him to be banned from performing in the country.

In a joint statement released by the organizers of the concert, Phambili Media and Play Network Africa, they say the following:

“The decision to cancel the Africans Unite Concert comes after the call from the Tshwane Entertainment Collective to boycott the Africans Unite concert in Tshwane. With the increasing threats of violence from other unfortunate segments of the public and without any government intervention, Phambili Media and Play Network Africa were prompted to take the threats and warnings seriously, as the safety of all artists and attendees could not be guaranteed. We then decided to cancel the concert. The safety of all attendees, artists and crew comes first.”

Both organizers go on to say that they still stand behind their decision to include Burna Boy in the lineup. “As one of the artists at the center stage of the xenophobic attacks uproar, we saw fit to engage him to be a part of the Africans Unite campaign that aims to ultimately change the current negative narrative to that of solidarity and unity.” On a rather melancholic note, they end off by saying, “It seems we have failed in this regard.”

Those who had already purchased tickets for the concert are eligible for a refund from their respective ticket merchants. Various reactions by fans concerning the whole situation and the cancellation were channeled on Twitter: