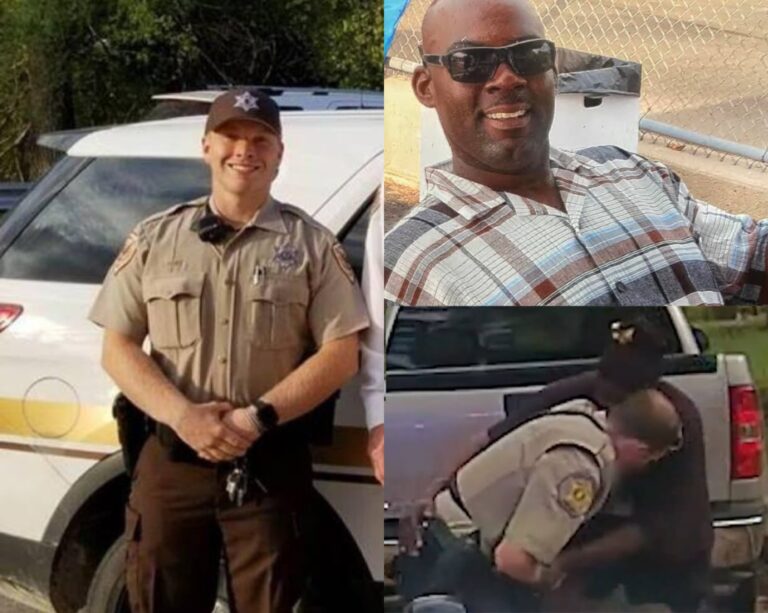 The Huffington Post reports that on November 6, as Derrick Kittling, 45, was driving his Chevrolet Silverado pickup during the day in a residential area of Alexandria, Deputy Rodney Anderson pulled him over for allegedly violating the law regarding window tint.

Outrage over the event led the Louisiana State Police to release body camera footage in the heavily Black city.

The clip shows a Rapides Parish sheriff’s deputy fatally shooting an unarmed Black man in the head during a traffic stop.

At a press conference on Monday, Anderson’s body-worn camera footage shown alongside other footage recorded by a bystander during the deadly traffic stop.

In the footage, Deputy Anderson can be heard telling Kittling to “stay right there” as the latter exited his car, before promptly switching orders and telling him to walk towards his police truck, which Kittling was standing beside after getting out of the driver’s seat.

Anderson isn’t heard once telling Derrick Kittling why he had been stopped. When he does ask for a reason, Anderson doesn’t answer the question.

Anderson’s conflicting orders appeared to confuse Kittling, as the deputy then tells him to “walk over here.”

“Walk to your truck,” the deputy says while Kittling is standing by the truck’s door and the deputy remains in his car.

The officer then gets out of the police vehicle and demands Kittling keep his hands out of his pockets. As Kittling walks to the back of his truck, per Anderson’s orders, he’s accosted by the officer who grabs his left arm.

Anderson goes on to say that Kittling is following his orders before telling him to turn around and face the truck. Kittling then asks if he can retrieve his phone, to which the deputy responds: “we will get to that,” and stops him from getting his phone.

Kittling continues to remain confused during the encounter with Anderson, asking the officer “why are you grabbing on me, bruh?”

A Struggle Ensues, Ending With Derrick Kittling – Who Was Unarmed – Shot In The Head

The officer can then be heard telling Kittling to put his hands behind his back several times, but the still-confused Kittling asks Anderson, “For what?”

Then, a struggle begins.

The sheriff’s department said that Anderson “lost control” of his Taser before Kittling retrieved it amidst the struggle as it lay on the ground.

It remains unclear if Derrick Kittling ever pointed the Taser toward Anderson.

The struggle, which lasted about a minute, ends with the officer fining a shot. “Shots fired, shots fired,” Anderson can be heard saying.

Meanwhile, dashboard camera footage shows Anderson carrying the gun and looking at Derrick Kittling as he lay on the ground. He then makes a call toward other officers, telling them he shot the man in the head, The Huffington Post reports.