For brutally beating an undercover colleague in 2017, Dustin Boone, a Racist Ex-cop is sentenced to 1 year and 1 day jail time 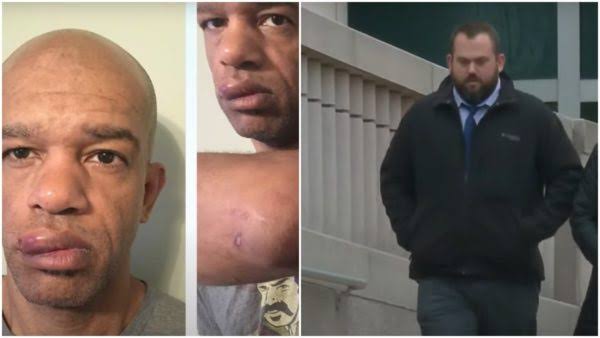 A racist Caucasian ex-cop Dustin Boone in St. Louis, Missouri has been let off the hook with only  a slap on the wrist for his violent offenses against a 37 year old fellow cop. During a 2017 protest that resulted from the acquittal of ex-cop Jason Stockley in the killing of Anthony Lamar Smith; a Black undercover police officer was brutally beaten by Dustin Boone and another officer named Randy Hays. Boone pinned officer Luther Hall to the ground and allowed Hays to savage him with a baton because they believed that Hall was a protester, according to a report on Buzzfeed News.

A federal judge gave a white former St. Louis police officer, Dustin Boone, 37, less than half the prison time his own defense lawyers asked for after he was convicted for his role in the beating of an undercover Black colleague during the 2017 racial justice protests in the city pic.twitter.com/dUt2X448NX

Prosecutors in the case had asked that Dustin Boone be sentenced to 10 years in prison. His defense attorneys asked for a little over 2 years. However, US District Judge E. Richard Webber decided both suggestions were ridiculous and then went ahead to slam Boone with a sentence of 1 year and 1 day that way he would be eligible to get reduced time for “good behavior”. Although the injuries and PSTD that Luther Hall suffered got him a $5 million settlement from the department, this amount of jail time for Boone’s crimes is insulting.

During the trial, prosecutors released mountains of evidence proving that there was no “good behavior” in Boone’s body. For example, he sent the following text to another officer on the force during the times of protest.

“But it’s gonna be a lot of fun beating the hell out of these s**theads once the sun goes down and nobody can tell us apart,” he wrote in one message.

In another text, Boone referred to Black folks as “F***ing ni**ers” while talking to another officer. Yet, the biased judge only saw 366 days of “punishment.” as a fitting judgement for Dustin Boone.