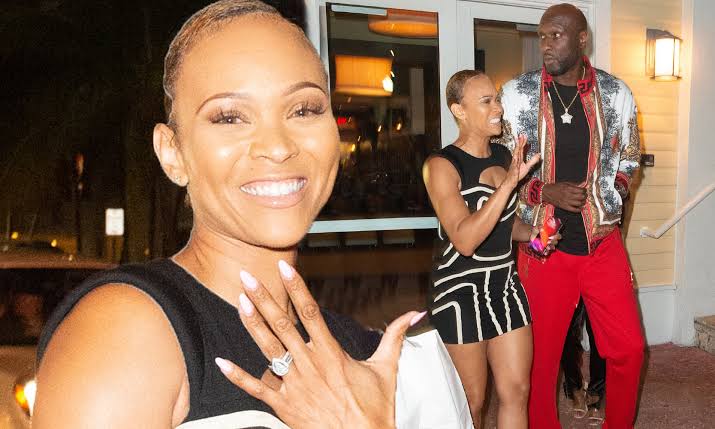 After his situationship with the Kardashians—his divorce with Khloe-Kardashian got finalized in 2016–and his battle with drug abuse; the former Los Angeles lakers forward, has engaged his personal trainer—Sabrina. Lamar Odom posted on his Instagram, and referred to her as his soon to be wife. 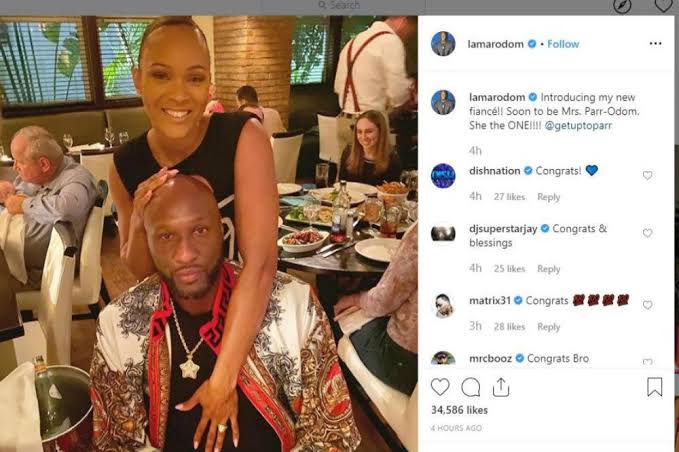 He shared a sweet image of the stunner showing off her huge diamond ring on his chest as they posed at dinner together.

Lamar Odom popped the question during a romantic dinner at Myles Chefetz Prime 112 restaurant in Miami.

Television personality NeNe Leakes was present at the proposal as replied to Odom’s post writing; ‘So glad I could be here wit you. Love both of you and praying over this union.’

The happy couple were seen for the first time together back in August and she threw him a birthday bash for his 40th birthday.

Last month the former basketball star addressed his exes while posting a sweet message about his new love as he shared an image of him kissing Sabrina with the caption; ‘The look on @getuptoparr face is how she makes me feel everyday. Outside of my daughter, this is the most serious and committed relationship I’ve ever been in with a woman.

‘I’m tired of people asking me questions about my ex’s based on old interviews and old comments! I said what I said then based on where I was in life at that time. I was young, wasn’t sober and going through a lot. All of that is different now. I’m at where I want to be at!’

Three months of dating before an engagement may seem rapid but Lamar popped the question to Khloe after just one month of dating in 2009 and  Three years after his divorce with khloe, Lamar Odom is ready to walk down the aisle again.