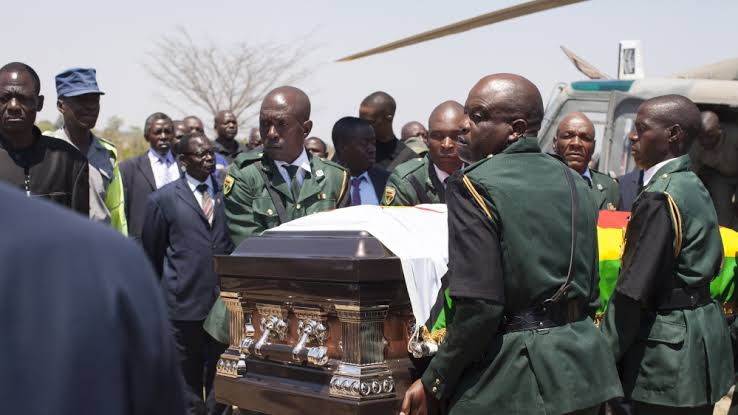 A Zimbabwean court has confirmed a traditional chief’s ruling that the former president Robert Mugabe’s remains be exhumed for reburial at the national heroes’ shrine in the capital city.

Mugabe’s children had gone to court to challenge chief Zvimba’s ruling in the case against their mother regarding the burial place for the former president.  They argued that the chief acted out of jurisdiction when he found Grace Mugabe guilty of violating traditional norms by burying the former president in his courtyard.

The chief had fined Grace with five cows and a goat.  He had also given orders for the exhumation and reburial of Mugabe’s remains at the National Heroes’ Shrine. A copy of the ruling read, “I give powers to those who are permitted by law to exhume the late Robert Mugabe’s remains from Kutama and rebury them at the National Heroes Acre in Harare.”

Mugabe’s children, Bona, Tinotenda and Bellarmine Chatunga filed an appeal with a local magistrate following the chief’s ruling. They argued that the chief went against the law by making a ruling that overturned a burial order when he did not have judicial authority to interpret legal acts from superior legislation.

They also accused the chief of making a false finding of fact and insinuating that Mugabe was buried inside a house. The appeal was today dismissed by the magistrate.

It is a norm in Zimbabwe that all heads of state are buried at the National Heroes Acre. When Mugabe died in September 2019 his wife went against this tradition and buried the former president in the courtyard of his home.

At the time of his death Mugabe was 95-years-old and had managed to rule Zimbabwe for 37 years before he was ousted in a coup in November 2017.