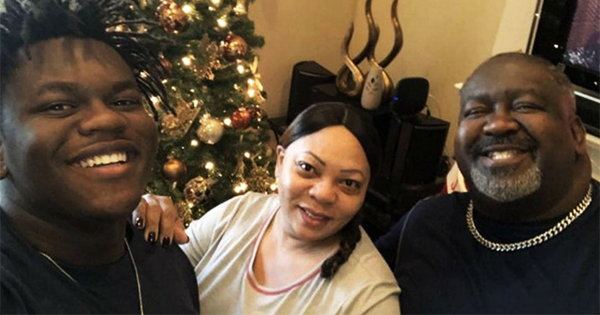 Justin Hunter, a 17-year old African American teen from Georgia, is devastated after he has lost both of his parents within just four days due to COVID-19.

We were a regular family, just trying to stay safe during this pandemic,” Hunter told WSB TV.

Justin Hunter  said he and his parents took all the preventive measures like wearing a mask and gloves when going out. But they all still got infected with the coronavirus.

“I don’t really know how our family got the virus,” he said.

Justin was asymptomatic, but his parents showed serious symptoms such as high fever, headaches, and cough. Justin’s father, Eugene, died first on June 26 before his mother, Angie, who died four days after.

Justin was heartbroken with his parents’ death but he tries to remember his good memories with them especially their 35 years of marriage and being his supporters since he started playing football when he was young.

“Their relationship was true love for sure. They had very big hearts, and they would give without even thinking about getting back,” he said.

Moreover, Justin is calling for others to take the virus seriously.

“If you don’t wear (masks) for yourself, wear it for the next person cause you could be saving that person’s life,” he said.

Meanwhile, a GoFundMe has been set up to raise funds to help Justin get back on track and continue his education. It has so far raised over $500,000.