Ghana Welcomes The Survivors of the 1921 Tulsa Race Massacre

Two survivors of a century-old massacre in the United States were in Ghana last Sunday; with their grandchildren at the start of a visit to connect with their “motherland.” 107 year old Viola Fletcher, also known as ‘Mother Fletcher’, and her brother Hughes Van Ellis, who is  100 year old, known as ‘Uncle Red’; are from the district of Greenwood in the Oklahoma city of Tulsa that was devastated in 1921 by a mob of armed white people.

In 1921, about 300 African Americans were killed in the Tulsa race massacre, in the area which was nicknamed; “Black Wall Street” and some 10,000 left homeless when the district was set ablaze, leaving a vibrant the economy in ruins.

According to the Guardian, Fletcher and Ellis were accompanied by their grandchildren on a week-long trip to the West African nation; as part of a government campaign to attract people of African heritage abroad ‘back home’.

The siblings landed in Ghana’s capital of Accra on Saturday with beaming smiles; waving from their wheelchairs to airport onlookers cheering ‘welcome home’. 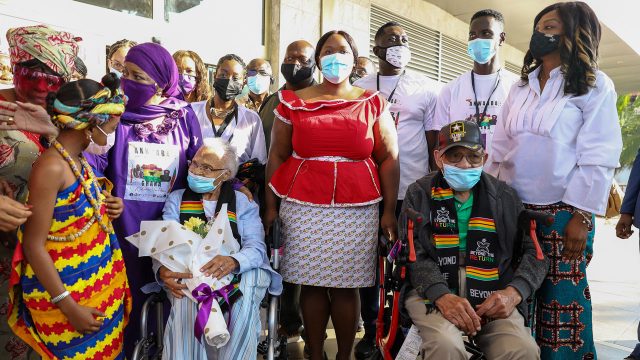 “It’s my first time on the continent of Africa and I’m just thrilled to be here,” said Ellis’ daughter, Mama.

As they made their way out of the airport, the survivors were given flowers and sashes saying; ‘Beyond the Return’ – in reference to the government campaign launched in 2019, four centuries after the first slave ship landed in what is now the United States.

“My grandparents are extremely excited to be home for the first time on the motherland,” said Fletcher’s grandson, Ike Howard. “If you haven’t visited Africa, this is the time to come.”

“We’re in the middle of a pandemic but tomorrow is never promised to anyone.”

Viola Fletcher said she relives memories of the massacre every day.

“On that first night, in 1921, I went to bed in my family’s home in Greenwood,” she recalled; in a statement published by the Diaspora African Forum.

The non-profit organisation co-sponsored the trip with Our Black Truth; a social media platform where African descendants can learn about their history.

“I had everything a child could need… But within a few horrible hours, all of that was gone,” said Fletcher.

“Now after all these years, I’m so happy to be fulfilling a lifelong dream of going to Africa and I am so pleased that is to beautiful Ghana.”

For Nadia Adongo Musah, from the government’s diaspora affairs, the survivors’ visit is just as historic.

“I think this is one of the biggest historic African diasporans that have come back to us,” said Musah.

The family is scheduled to visit historical sites from the colonial era and receive symbolic titles during traditional ceremonies.