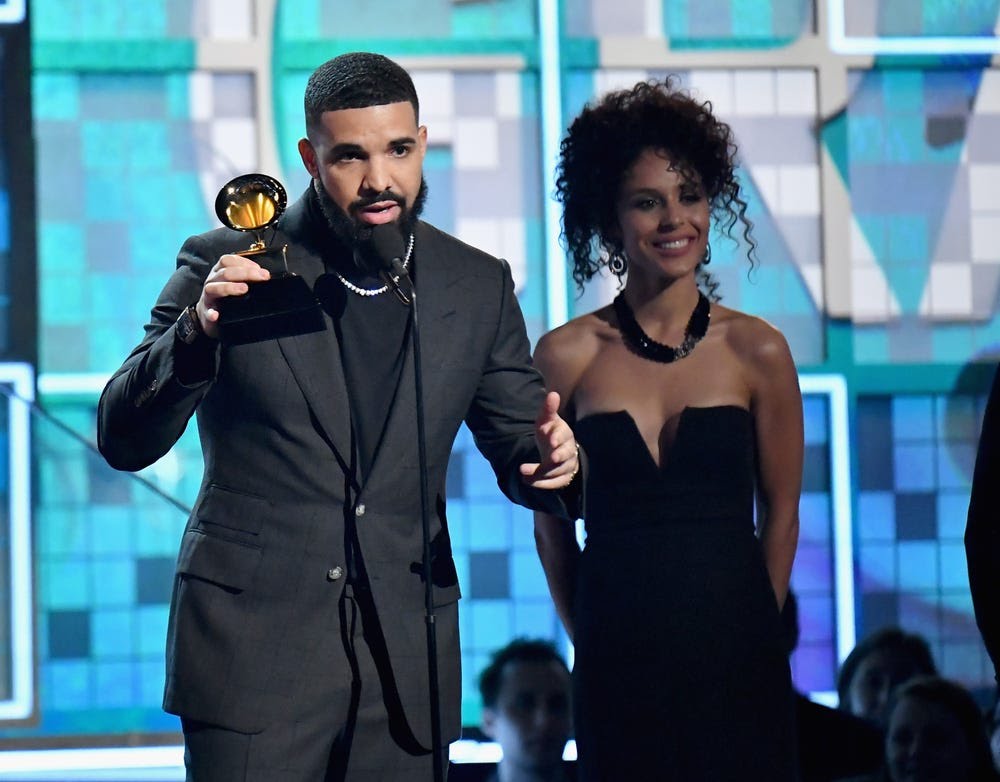 Over the years, more Artists have spoken out against The GRAMMY Awards, questioning the relevance of the outdated event.

Drake took to his Instagram on Wednesday, to question the relevance of awards event, after fellow Toronto native The Weeknd failed to receive any nominations for his acclaimed 2020 album “After Hours.”

“I think we should stop allowing ourselves to be shocked every year by the disconnect between impactful music and these awards; and just accept that what once was the highest form of recognition, may no longer matter to the artists that exist now and the ones that come after,” he said.

“It’s like a relative you keep expecting to fix up, but they just can’t change their ways.”

The biggest controversy has come from The Weeknd’s camp; which follows the singer not getting any nominations for the 2021 ceremony; despite releasing his album, ‘After Hours,’ and some singles throughout 2020.

According to reports from TMZ, Abel opted for a performance at the Super Bowl next year instead of performing at The GRAMMYs, which led to the awards show retaliating by not giving him any nominations.

Drake explained, that he, like many others thought, The Weeknd was a certain bet for at least album of the year; and that maybe it’s time for a new awards system to be created for the future.

“The other day I said @theweeknd was a lock for either album or song of the year along with countless other reasonable assumptions and it just never goes that way,” he said. “This is a great time for somebody to start something new that we can build up over time and pass on to the generations to come.” 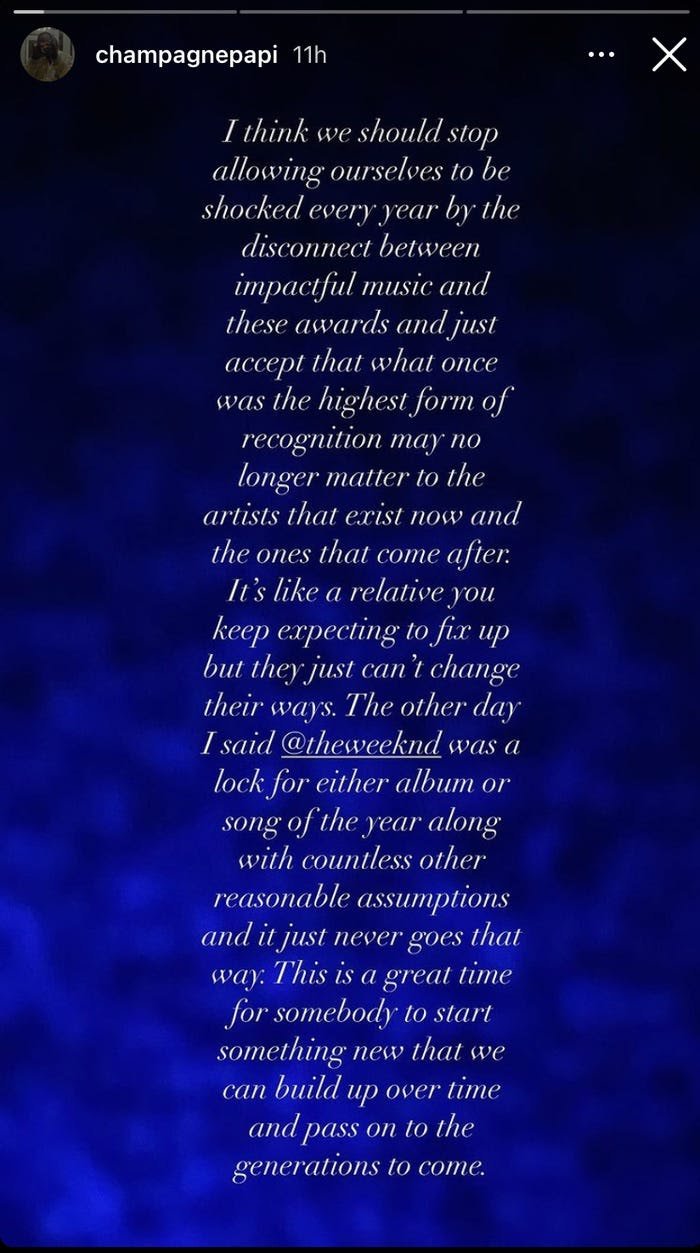 The Weeknd himself responded to the nominations with a series of tweets in which he said: “The Grammys remain corrupt. You owe me, my fans, and the industry transparency.” 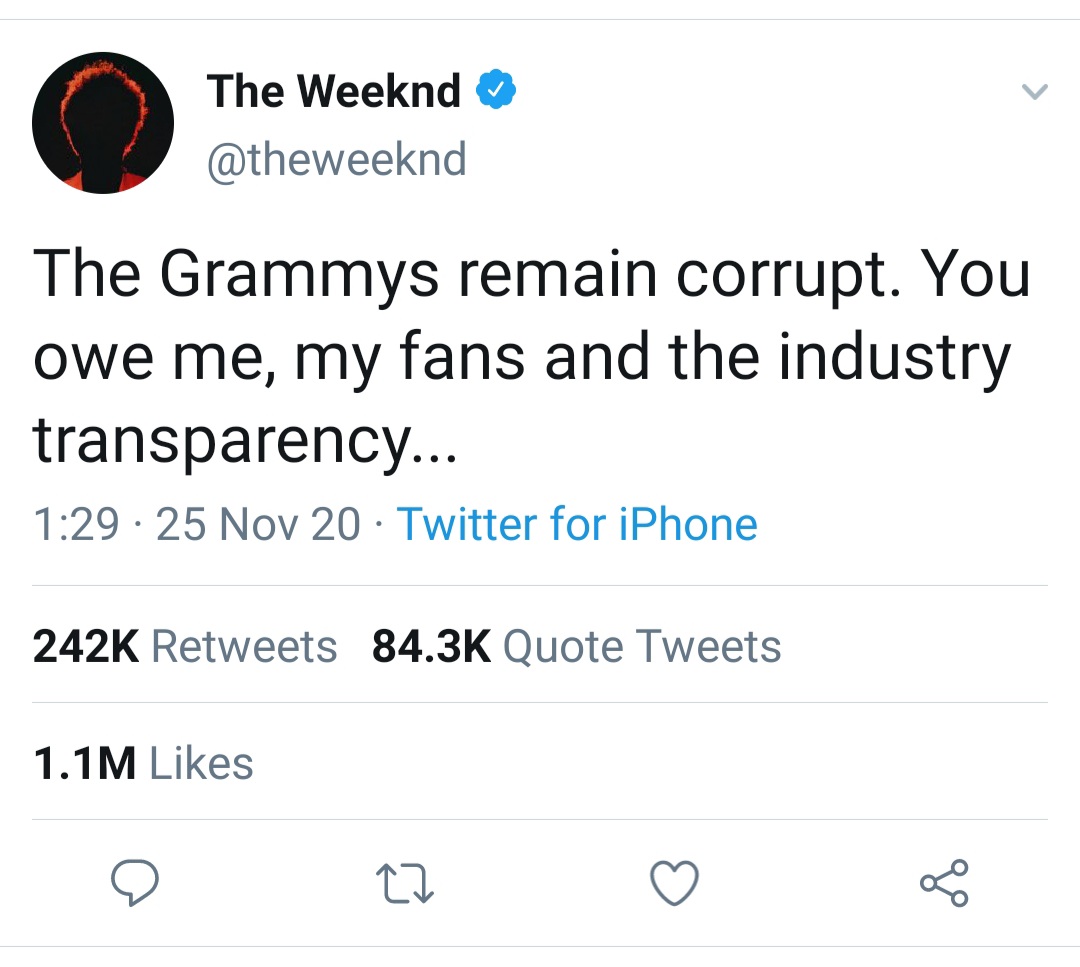 Drake received two nominations this year for best music video and best rap/sung performance; however, this isn’t the first time he has spoken out against the Recording Academy.  In 2019, at the Grammy awards event, when picking up best rap song for “God’s Plan,” he challenged the relevance of the award show.

He said “Look, if there are people who have regular jobs who are coming out in the rain and the snow, spending their hard-earned money to buy tickets to come to your shows, you don’t need this right here. I promise you. You already won.”