Headmaster Resigns After “forcing 11-year-Old Black Student, Trayson Paul To kneel And Apologize” Because It Was The African Way 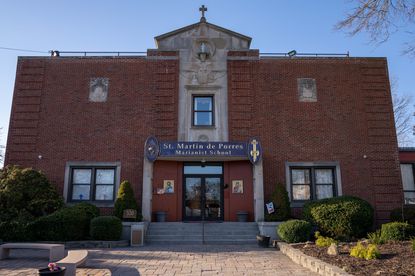 The Caucasian headmaster of a Long Island Catholic school who reportedly forced an 11-year-old Haitian-American student, Trayson Paul, to kneel down and apologize to a teacher has resigned.

Holian was placed on leave prior to his resignation, while St. Martin de Porres Marianist School said it will continue to review the event to ensure something similar never happens again, CBS 2 New York reported.

On February 25, Trayson was in English class when he finished a reading assignment and started a different task because he wanted to get a head start, according to his mother, Trisha Paul.

That’s when Trayson Paul was scolded by the teacher for doing the wrong assignment, Paul said.

The teacher took Trayson to the headmaster’s office. It was there that Holian allegedly told Trayson to kneel and say sorry.

Holian is said to have told Trayson paul that kneeling and apologizing was a method of seeking forgiveness that the headmaster learned from a Nigerian father of a former student who claimed it was the ‘African way.’

Haiti is a North American country in the Caribbean Sea.

‘Once he started mentioning this African family, that’s when it just clicked,’ Paul told the Daily News.

‘Like, this is not normal procedure. I felt there was no relevance at all.

‘Is he generalizing that everyone who is black is African? That’s when I realized something is not right with this situation.’

The boy’s mother said that the family suspects Trayson was treated more harshly due to his race.

She said her son, who is normally an outgoing and socially active kid, has become ‘really reserved’ since the incident. As a result, he has started to see a therapist, according to Paul.