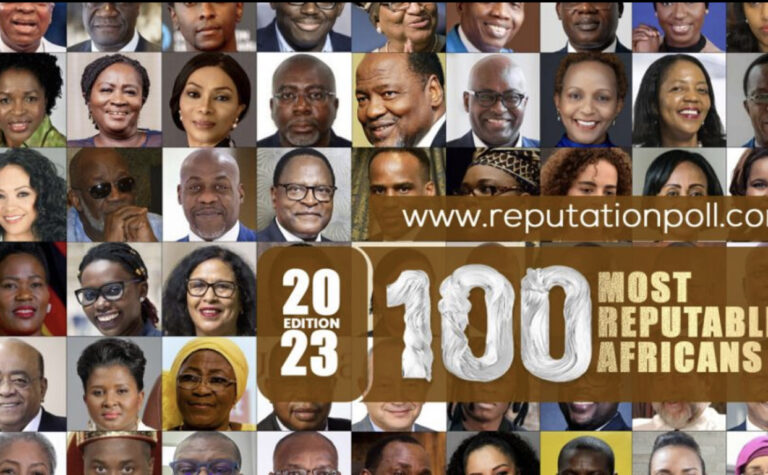 The 100 most reputable Africans as of 2023 have been compiled by Reputation Poll International, a top global reputation company. People from a variety of fields, including business, education, entertainment, government, and human rights, are included on the list. The leading deciding factors for this list are Integrity, effect, and visibility.

Among the notable individuals on the list are Amina Chawahir Mohamed of Kenya, Bonang Mohale of South Africa, Chancellor of the University of the Free State and Professor at the Johannesburg Business School, and Njoya Tiku of Cameroon, Manager of the UNDP Regional Office in West and Central.

Some of the most reputable Africans and their fields.

In addition to the individuals recognised on Reputation Poll International’s “100 Most Reputable Africans” list for their various achievements, there are also those who are celebrated for their contributions to social impact and social entrepreneurship, helping to transform businesses in Africa and positively impacting lives without causing controversy.

The 100 Most Reputable Africans list is aimed at recognising and celebrating the achievements of individuals making a positive impact in Africa and worldwide.

Below is the list of the 100 Most Reputable Africans according to reputation poll:

3. Agnes Matilda Kalibab || President of Alliance for a Green Revolution in Africa (AGRA)

18. Cosmas Maduka || Founder and Chairman of the Coscharis Group

24. Denis Mukwege || Founder and Head of the Panzi Hospital

34. Jane Naana Opoku-Agyemang || Chancellor of the Women’s University in Africa

40. Judy Dlamini || Chancellor at the University of Witwatersand

71. Njoya Tiku || Manager of the UNDP Regional Office in West and Central Africa

75. Patrick Ngugi Njoroge || Governor of the Central Bank of Kenya

80. Sadia Haji Samatar || Lead of the Parliament in Somalia

82. Samuel Esson Jonah || Chancellor of the University of Cape Coast in Ghana

88. Tijjani Muhammad-Bande || The Permanent Representative of Nigeria to the United Nations

92. Wally Adeyemo || Deputy Secretary of the United States Department of the Treasury

93. Wanjiru Kamau-Rutenberg || Executive Director at Rise, a project by Schmidt

95. Wided Bouchamaoui || Leader of the Tunisian Confederation of Industry, Trade, and Handicrafts

98. Winnie Byanyima || Under-Secretary-General of the UN and Executive Director of UNAIDS