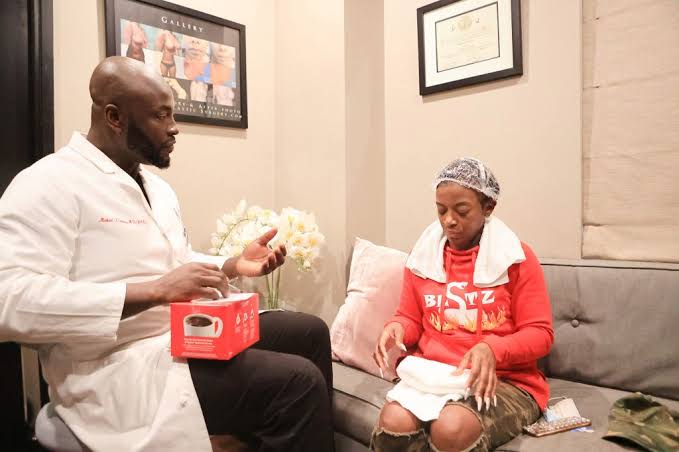 A Louisiana woman, Tessica Brown found herself in a real “Sticky” situation, after she used a gorilla glue spray meant for industrial purposes on her hair. The 40 year old woman, who had spent weeks agonizing over the painful glue on her hair, made an SOS video on tiktok where she sought for help; the video went viral, and she became popularly referred to as the #gorillagluegirl. 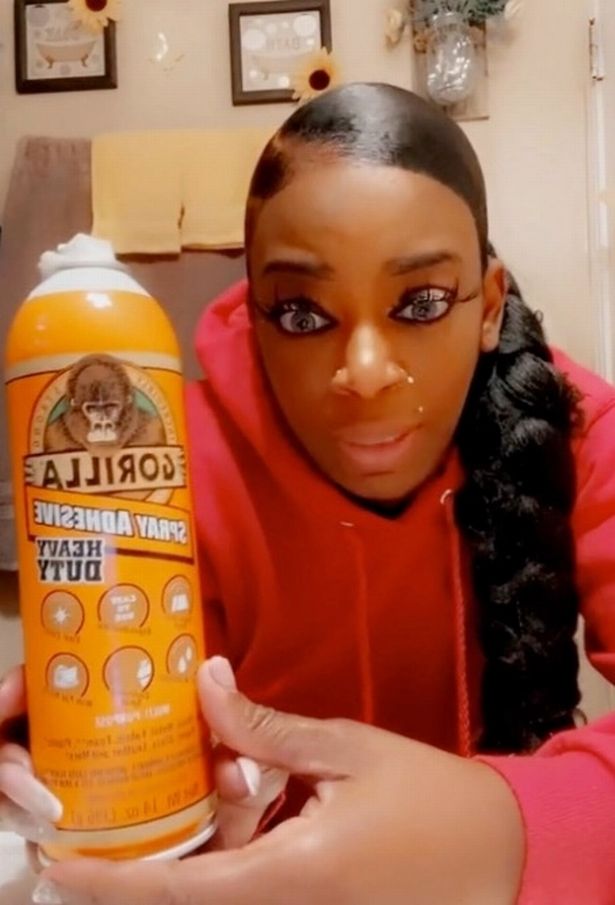 She catapulted to internet fame last week after posting a video on TikTok in which she called the decision to use the adhesive spray a “bad, bad, bad idea.” More than 30 million people have viewed it there, along with countless more on Instagram and Twitter. They have clamored for updates and flooded her posts with words of encouragement (and criticism), all while piling on suggestions for how to help. But nothing worked.

All efforts to free her and her hair from the extreme strong hold of the gorilla glue, proved abortive until a home made remedy formulated by Ghanaian Beverly Hills plastic surgeon; Michael Obeng, finally freed her.

Finally, more than a month after her mishap, Ms. Tessica Brown had the glue removed from her hair, thanks to a Los Angeles plastic surgeon who spent hours on Wednesday using a homemade solvent to get the job done.

Nytimes reports that; “It went from scary to terrifying to pretty much being tortured,” Ms. Brown, 40, said in an interview on Thursday. “And at this point, a big relief.”

Ms. Brown, who runs a day care and a dance team, the Dazzling Divaz, in Violet, La., said that if she could go back to the day it all began, she would have worn a hat instead.

While rushing to get ready about a month ago, Tessica Brown realized she had run out of her usual hair spray, Got2b Glued. Scrambling, she spotted a bottle of Gorilla Spray Adhesive, a permanent spray made by Gorilla Glue. She thought that by the time she got home that night she would be able to wash it out. A month later, it hadn’t budged.

After several remedies and treatments and suggestions from all corners which didn’t work; Dr. Michael Obeng, a plastic surgeon from Los Angeles, offered to remove the glue from her head free of charge. He performed the procedure on Wednesday while she was under light anesthesia. Afterward, she was able to comb through her hair with her fingers.

Michael Obeng To The Resue

“Dr. Obeng got every bit of it out,” she said, adding that he’ll give her a few more scalp treatments to prevent her hair from falling out, she said.

In an interview with TMZ on Wednesday after the surgery, Dr. Obeng said he created a solvent to dissolve polyurethane; the main active ingredient in Gorilla Glue, made of medical grade adhesive remover, aloe vera, olive oil and a little bit of acetone. He tested the concoction on a skull outfitted with real hair and extensions that he matted down with Gorilla Spray Adhesive.

“I have a chemistry background, so I knew that any compound can be broken down,” Dr. Obeng said in the video. He said that the surgery “went well,” and that Ms. Brown was lucky not have been severely injured on her scalp; other than some irritation from chemical treatments she had used.

“She’s been through a lot, and I hope that you guys will learn from Tessica’s injuries,” he said.

A spokeswoman for Gorilla Glue said the company was glad Ms. Brown had been able to receive treatment and “we hope that she is doing well.” The spokeswoman declined to comment on whether; Ms. Brown’s experience had led to any discussion about whether to add hair to the list of improper places to use Gorilla Glue Adhesive Spray on the product’s label.