How The Tortoise Got A Beating. An African Folktale 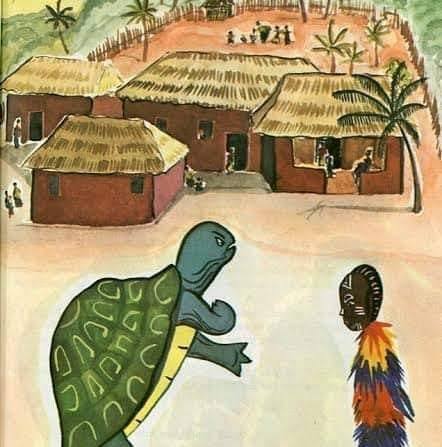 Storytelling is indigenous to Africa and people of African Descent. But for years, Most children Outside Africa know little or nothing about folktales from Africa. Some do not even know that folktale exists. All they know are; Cinderella, Beauty and the beast, Snow White and the Dwarfs, Nothing about their ancestry. 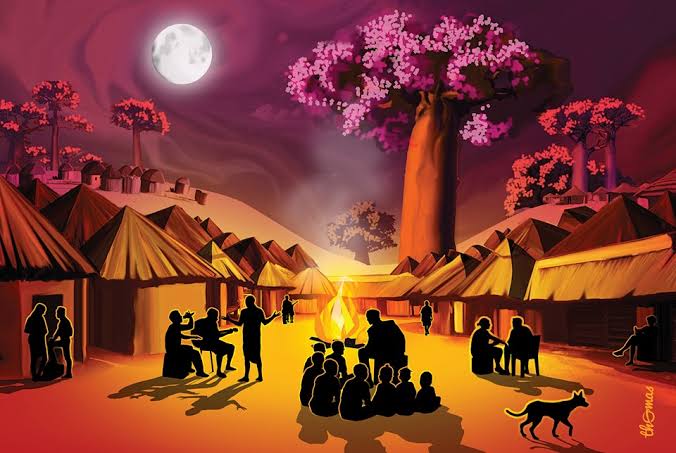 Folk tales and storytelling are an integral part of Africa. They teach morals, build love and unity, and also serve as warnings and deterrents. Folktales in Africa Entertain and Enlighten.

For centuries, Africans and their descendants have been telling stories about faraway lands and places. The stories always have animals that can talk. What is fascinating about these stories is that they have travelled from Africa to many parts of the world where Africans and descendants of Africans now live. The stories may have changed slightly but the characters and the messages and the way the stories are told is still the same.
People whose ancestors came from Africa are spread out all over the world.
Folktales are one of the ways that history is passed down the generations in African, Caribbean, African American and African Canadian communities.

A typical Setting for storytelling consists of children and young adults sitting or standing round the older story teller. Stories are characterized by call and response songs, dances and questions. This story telling setting is popularly referred to as TALES BY MOONLIGHT.

Why The Tortoise Got A Beating

One day, A tortoise named Mbe, went out to gather fruits. He saw a big mango tree with ripe juicy mangoes and he decided to pluck from it. Mbe had gathered a sack full of mangoes when one of the mangoes fell out from the sack and went into a hole. 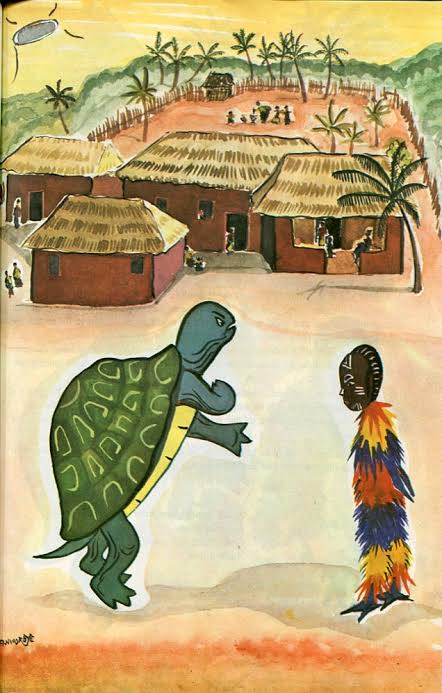 Mbe The Tortoise chased after the single mango and found himself in a hut. An old woman was already eating the mango and the tortoise got really angry and demanded for his mango.
When the old woman saw Mbe, she asked for his forgiveness said she had eaten the mango already.

Unfortunately, Tortoise could not forgive the old woman and he demanded for a replacement. The old woman pleaded some more, yet The tortoise remained adamant and continued demanding for his mango.

“hmmm, I’ll give you something in exchange for your mango” the old woman pleaded. She handed Mbe the tortoise a drum and asked him to beat the drum when he gets home.

“When you get home, beat this drum, a pleasant surprise awaits you”

Tortoise took the drum home and beat it. The sounds from the drum produced juicy mangoes out of the drum. When tortoise tasted the mangoes he was filled with joy and he didn’t stop beating the drum. Even after he had eaten enough mangoes.

The drum soon wore out and tortoise became greedy. He came up with a plan to get another mango producing drum from the old woman.

Tortoise found his way to the forest again and this time he plucked two mangoes and threw them down the hole. He went right into the hole and found the old woman again.

“My mangoes mistakenly slipped into your hut, have you found them”? Mbe asked the old lady.

“yes, here they are, take your mangoes”. The old lady replied.

Tortoise was disappointed. However he still demanded for a drum. “Those are not my mangoes! I want another drum since you have hidden my mangoes”. He insisted.

The old woman walked to a store and tortoise followed, still demanding for a drum. The old Woman asked tortoise to choose a drum. Mbe the tortoise, out of greed, chose the biggest drum and ran out of the hut, happy with his deceit.

As soon as Mbe the tortoise got home, he beat the drum with all his strength but he was in for a surprise.

Hefty masquerades came out of the drum and whipped the tortoise very hard. The tortoise got a thorough beating.

Crying, the tortoise ran back to the old woman and asked her for forgiveness. He apologized for lying and being rude to her.

This folktale teaches the important lessons of respect, honesty and generosity. The old woman forgave poor tortoise who had already Learnt his lessons. They became friends and lived happy ever after.