Images Of The African American Community In 1943, Shot By Gordon Parks. 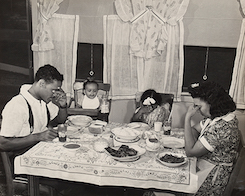 History is very vital to our knowledge enhancement as Black people because much of our history has been obliterated. Our ancestors either passed our history orally or recorded by our ancestors in hieroglyphics, Nsibidi or Ogam Writings which they colonizers are unable to properly decipher.
Visual history can also help in giving us an image of our past. Photo-history as presented in this article is worthy of reflection. Recorded by Gordon Parks.

The photographer of these historical images is one of the greatest black photographers, Gordon Parks.

Gordon Roger Alexander Buchanan Parks(November 30, 1912 – March 7, 2006) was an African American photographer, musician, writer and film director, who became prominent in U.S. documentary photojournalism in the 1940s through 1970s—particularly in issues of civil rights, poverty and African Americans and in glamour photography.

Parks was a self taught photographer, who used his photography to portray the inequities in the African American Society.

The photos shared in this article are of Harlem and were taken by Gordon Parks, who was a young photographer for the Office of War Information who would go on to become one of the most renowned photographers of the twentieth century.

Born in 1912, Gordon Parks left home at the age of 15 and bought his first camera in a pawn shop at 25. He made a living as a portrait and glamour photographer in Chicago while simultaneously capturing compassionate images of black life on the city’s South Side.

His work on the South Side led to a job in the Farm Security Administration’s famed documentary photography program, and later the OWI.

A few years after Parks shot these exploratory images of the streets, storefronts and residents of Harlem, he moved into the neighborhood and shot a photo essay on a 17-year-old gang leader, which won him a staff position at LIFE magazine. He would work there for more than two decades, producing an acclaimed body of work covering everything from racism and segregation to fashion and sports.

All the images shared here are Credited to Gordon Parks.