Inikpi, The African Princess who buried herself alive to save her people 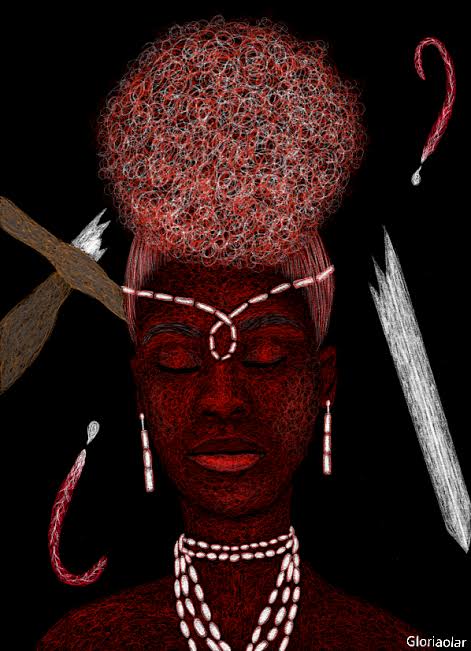 Africa is a land of bravery. Courage, fearlessness are daredevil bravery are engraved in the African DNA of both Male and Female. The bravest stories originate in Africa and this is the story of Inikpi, a brave African princess of the Igala kingdom. Princess Inikpi was a beautiful and intelligent young woman, whose selfless sacrifice saved her people from doom. She was the only daughter of her parents, the Atah Ayegba Oma Idoko and Queen Omele. The Igala people call her Inikpi oma’fedo baba, meaning; “Inikpi, the father’s beloved.” Although some parts of the historical recount differ depending on who is telling the story; there are many parts that are clear.

According to GuardianNG, The Igala Kingdom at about the 15th and 16th century was at loggerheads with the Bini Kingdom; one of their strongest enemies. The Bini warriors persistently attacked Igala land to the extent of wanting to annihilate the people. The Bini warriors employed different tactics, including poisoning the streams, sudden attacks in the day and night, and laying siege to their farmland. The Igala people then lived in constant fear, as they could not go to the farm or to the stream.

Owing to this, the chiefs consulted the oracle, which proclaimed that the only remedy to the safety of the kingdom and victory in war, was for the king to bury his most beloved daughter, Inikpi, alive. The king had four male children; Akogu, Agada, Eleme, Ohiemi Obogo, and Inikpi his only female child. He loved Inikpi so much, which was one of the reasons she was always in the palace with the father.

The king was distraught and for days could not eat or drink. He pleaded with the oracle to accept slaves, but it insisted it must be royal blood — Inikpi.

The Princess noticed his father’s unhappy mood and tried to find out why, but he would not tell her. She became worried too and persisted to ask until the seventh day, the king told her what the oracle said he should do to save Igala land and the people from destruction.

Knowing the reason for her father’s sad mood, the princess promised to offer herself. Her acceptance brought mourning across the land, especially from Omele, her mother.

On the appointed day, Inikpi went to the bank of River Niger at Ida and was buried alive alongside nine virgin slaves that would help her thereafter.

After the sacrifice, as the Bini warriors advanced they saw the whole Igala land in flames and retreated; believing that there was no need taking the war to a town already on fire. But it was the blood of Inikpi that deceived them, according to history.

Inikpi’s sacrifice brought unending joy, peace, and security to Igala Kingdom. It liberated the people from the shackles of their surrounding enemies, as the Igala army was no longer defeated at wars.

Inikpi lived and died a virgin and her courageous act has caused many parents to name their daughters after her. Her statue is at Ega in Idah market in Kogi State; which is considered the Igala traditional headquarters and many Igala people bear the name “Inikpi” to honour her. Several plays have also been produced to celebrate her story.

African  Queens of centuries ago were brave warriors who fought for their people in various ways even against oppressors and the intruding colonizers. Queens like Moremi Ajasoro fought for her people and made several sacrifices to ensure their freedom.