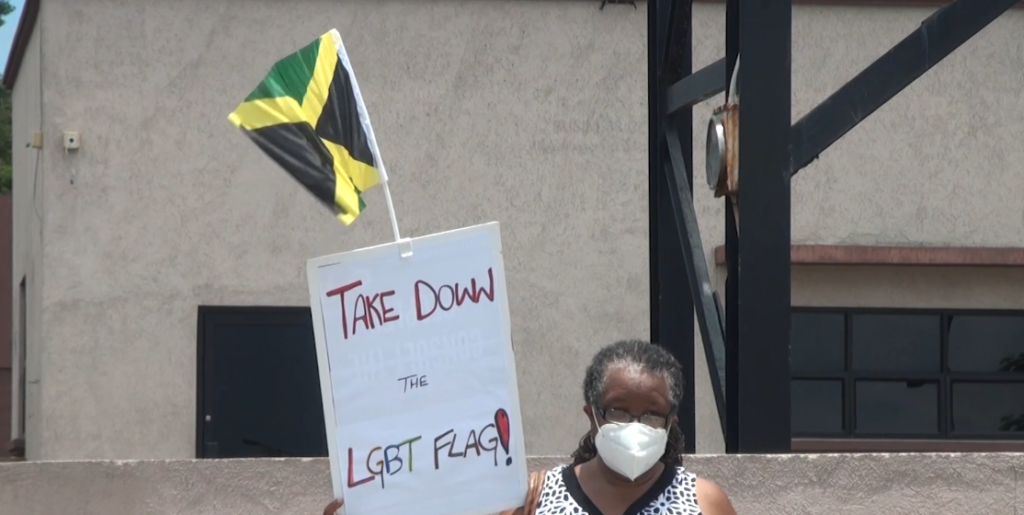 Concerned Jamaicans protested and demanded that the US Embassyin Kingston Jamaica, remove the LGBTQ Pride flag hoisted on its grounds. The group says it is not only goes against articles in the  Vienna Convention on diplomatic relations, but is a form of cultural imperialism.

“Cultural Imperialism,” was the phrase on most of the placards broadly refers to the exercise of domination in cultural relationships. In such cases, the values, practices; and meaning of a powerful foreign culture are imposed upon one or more native cultures.

Phillipa Davies, Advocacy Officer at the Jamaica Coalition for a Healthy Society says the Pride flag represents; life practices that threaten the Jamaican culture and the teachings of the Bible. She says it also affects the health of the society.

According to Cmtv, Protesters say they’ve been peacefully protesting that the flag be taken down since the day it was raised; but are shocked it remains on the flagpole up to Emancipendence week.

Efforts by local news outlets to contact the US Consulate and a member of the LGBTQ group; on Friday, August 6, proved futile. However, the protesters say they will continue to stand against the flying of the LGBTQ Pride flag; describing it as a symbol of disrespect on Jamaican soil.