Jamaica’s Oldest Lady, Miss Nor, Beats Coronavirus As She Turns 107 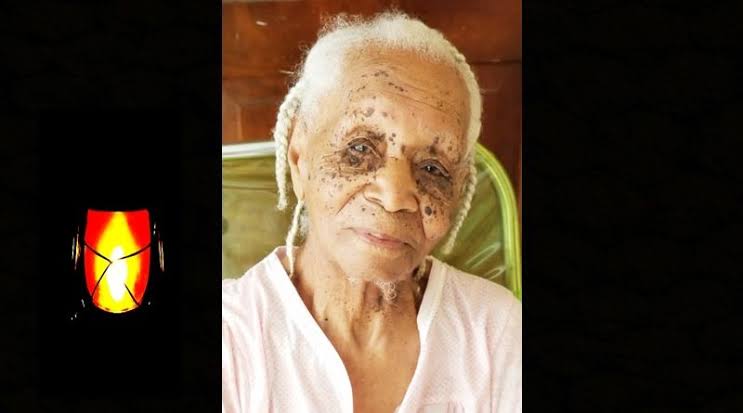 After beating the deadly coronavirus that is said to be fatal for old people, Nora Miller Welsh fondly called miss nor; celebrated her 107th birthday on March 28. She attributes her long strong life to a “blessing.”

She said the ‘blessing’ received from her maker is responsible for her relatively long life.

The centenarian, hails from the community of Wood Church in Blenheim, Hanover.

She is the oldest person in her district, where she operated a shop for decades. Her customers were particularly fond of the grater cakes and puddings she sold.

There is no record of Miss Nor having any relative who attained the ambitious 100 years.

Her siblings and peers all died. Her husband, Yulan Welsh, who was a cane-cutter, passed away in 2019 in his 90s.

According to Jamaicabeacon; Miss Nor still talks intelligently and, up to recently, had a razor-sharp memory.

Her family said she remembered people like former prime minister and national hero Alexander Bustamante, who is a native of Blenheim. She also remembered big occasions such as the day Jamaica gained independence in 1962.

Miss Nor became bedridden in recent years, but she doesn’t have any known ailment, her family said.

It further disclosed that Miss Nor recently tested positive for COVID-19, which has been killing mainly elderly people across the world.

She did the COVID-19 test after being exposed during frequent visits to hospital.

“When she come home, she was a skeletal. Mi cry soh till. They also put the tube in her and that was uncomfortable,” Nicole recounted.

“But God is good. She is looking well now, she picked up a lot. She wasn’t eating [when she came out of isolation]. Everything you give her, she spit it out. But now, she is eating a lot.”

Nicole, who was raised partly by Miss Nor, told The Beacon that she also did the COVID-19 test, but was not contacted regarding a result. She also has a difficulty believing that Miss Nor contracted the virus.

Miss Nor does not have any biological children.

But she is a proud mother-figure for her husband’s four children, and others such as George Campbell who is now 61 years old.

George ended up living under Miss Nor’s roof when he was less than a year old.

He explained that, although he now lives in the United States, he ensures that Miss Nor is well taken care of.

“She is the greatest lady ever to live on the face of this earth,” George told The Beacon.

“If I should live over again, I would want to grow up with those same people. I was the most loved child in the world.”

George added that Miss Nor’s kindness is among the qualities that set her apart.

Some of Miss Nor’s relatives ensure that they uphold their matriarch’s tradition of kindness to less fortunate people of Wood Church.

Yhanique Campbell, who is one of George’s daughters, said she travelled from the United Sates to celebrate with the centenarian who helped to raise her.

“She is the kindest human being I know, she doesn’t have anything that is too good to give to anybody,” Yhanique commented.

Yhanique also noted that Miss Nor, who currently is not the oldest person in Jamaica, is a big lover of children and church.

“She is a lady who loves her church, break communal bread, [and] sing on the choir,” Yhanique added.

Miss Nor, who became a Christian before independence, initially worshiped at Dias Seventh-Day Adventist Church. She later became a member of Blenheim Seventh-day Adventist when it began operation.

Pastor Christopher Johnson, who has been leading Blenheim Seventh-day Adventist for the past five years, is elated that Miss Nor has reached an additional milestone.

“She was a deaconess in the church for years – and also superintendent. She said she was also a Sabbath school teacher,” the clergyman noted.

Miss Nor, when asked how she eventually would like to be remembered, told The Beacon: “The life I live… It was good because me never do anything out-of-order.”

She advised young people to trust in The Lord and live a decent life.