Jay Z Reveals That He And Beyoncé Were Not Sitting In Protest During The National Anthem, Says A Protest Is Unnecessary 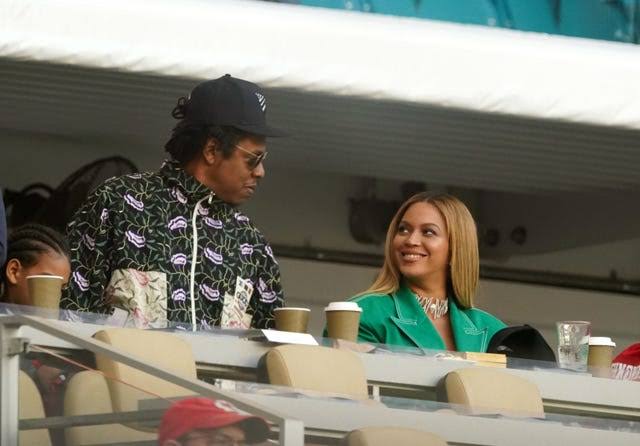 The power couple have come under fire for their apparent sitting down during the super bowl National Anthem rendition. Several people have analyzed the action of Jay Z and Beyoncé with some people arriving that it could be a protest move; something related to Colin Kaepernick.

However, in what could come as a disappointment to people who wished it was a protest move, Jay Z revealed that it was not a protest.

In a video obtained by TMZ, Jay clarifies the speculation around he and his wife sitting down. And apparently it was all just a misunderstanding. Jay Z was on a panel at Columbia University, and when the moderator asked about his intentions behind sitting he said there was no protest.

It actually wasn’t meant to be a statement, sorry,” Jay Z says.

He goes on to explain that he and Bey were simply “working” and analyzing the performances from an artists perspective.

During a Columbia University lecture on Tuesday 4 February; two days after the Super Bowl – the rapper insisted it “just happened”.

In 2018 Demi Lovato was hospitalised after a suspected drug overdose.

“We were talking about how beautiful she looks and how she sounds. And what she’s gone through in her life for her to be on the stage and we’re so proud of her,” he said.

At the lecture, Jay Z also explained that he produced all the musical performances at the Super Bowl as part of his deal with the NFL as its live music entertainment strategist.

Referring to Shakira and Jennifer Lopez performing the half time show; he said a “silent protest” from him was unnecessary as the diverse group of performers was “the biggest, loudest protest of all”.