Jean-Pierre Adams, Former France And PSG Defender Dies After 39 Years in a Coma 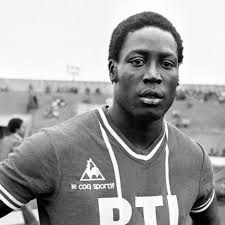 The Senegal born defender Jean Pierre Adams has lost the battle after 39 years in a coma. Adams went into a coma in March 1982 after an error with his supply of anesthetic. At the time Adams had suffered a damaged tendon while on training and was scheduled for a knee surgery.

However on the fateful day of the operation most of the staffs at the hospital were on strike. Regardless of this the available anesthetist who was also looking after seven other patients went ahead to operate on Adams. To make matters worse, Adam was supervised by a trainee.

Adam was blessed with one of the kindest woman for a wife. Since his discharge from the hospital, Bernadette Adams, his wife took over and has been taking care of him till his death. Many times she fought against the idea of unplugging her husband. She believed that Adams would rise from his coma one day. Too bad this did not come to pass.

Jean-Pierre Adams, aged 73 years was today pronounced dead at Nimes University Hospital. Married in 1969 the duo has two sons. Bernadette together with their two sons, Frederic and Laurent had kept a vigil at Adams bedside before his death.

Adams who was born in Dakar, Senegal in 1948 moved to France at the age of 10. He started his football career in the non-leagues games where he emerged a finalist of the french amateur championship.

After years in the non-leagues games Adams was approved in the Nimes club in the 1970. Here Adams made recommendable achievements helping the club reach heights it had never reached. In 1973 Adams moved to Nice after winning a chance in the France national team. He was one of the first black players to play for France. While here he played for nine consecutive seasons in its top division and brought home 22 cups.

He was then signed on a three season’s contract by Paris Saint-German in 1977. After two years he left Paris and joined FC Mulhouse as a player coach. Adams ended his career as a defender in 1981 with FC Chalonnais. The different clubs took to social media to eulogize Adams.

Nimes said, “We learned this morning of the passing of Jean-Pierre Adams. He had worn the colors of Nimes Olympique 84 times and with Marius Tresor made up the ‘Black guard’ of the french team. The club offers its most sincere condolences to his loved ones and his family”.

The responsible anaesthetic and trainee were punished to a one month suspension sentence and 750 euros fine in the mid 1990’s.