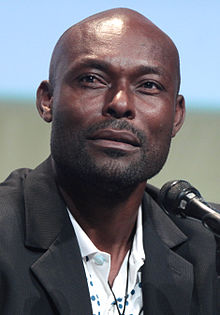 A prominent American-Haitian actor, one who is specialized with powerful interpretations to any character he plays, Jimmy Jean-Louis is our MBBA Man Crush Monday.

Jimmy Jean-Louis was born in Pétion-Ville, near Port-au-Prince, Haiti. He lived there until the age of twelve, when he moved to Paris with his family to pursue a modeling career, after moving he experienced a culture shock because of the rural to city lifestyle change.

He enrolled in business courses, but quickly realized that his heart lay in performance, and studied at the Académie Internationale de la Danse.

His parents returned to Haiti, but Jean-Louis and his brother remained in Paris.

Around a decade later in 1991, producers discovered Jean-Louis during one of his dancing stints in a French club, who were impressed. They tapped him to appear in a Coca-Cola advertisement, the success of which prompted the Jean-Louis to spend several years modeling across Europe. He was very successful in London, working for such notables as Gianfranco Ferré and Valentino. Before finding success as a model, he was homeless at times in Paris. By the mid-’90s, he was gracing music videos by such stars as Ophelie Winter, En Vogue, Mariah Carey, Seal, and George Michael, and appearing in low-budget “independent” films in Los Angeles.

He worked in musical theatre in Barcelona, Spain, spending three years with a musical theater “La Belle Epoque”, before moving to Italy where he created a successful career as an international model.

In 1995, he appeared in several episodes of an erotic French TV program. Jimmy moved to Los Angeles where he began acting full-time in underground and independent films. This eventually led to him landing a role in Jean-Claude Van Damme’s movie Derailed, which set the stage for subsequent roles with other Hollywood A-listers. He went on to have secondary roles in Tears of the Sun, Hollywood Homicide, Monster-in-Law and The Game of Their Lives. He was cast as the romantic lead in the 2006 film Phat Girlz starring opposite Mo’Nique as her love interest. He achieved his most widespread fame, however, when cast in the recurring role of The Haitian on the NBC television series Heroes, who is an associate of Noah Bennet. In an interview on The Post Show on G4, Jimmy Jean-Louis stated that the Haitian was originally supposed to be from New Zealand, and that the character was going to be “The Kiwi”, which is a colloquial term for the people of New Zealand. He also stated that he auditioned three times for the role of D.L. Hawkins, a part which he did not get. His most important role to date is playing the title character in Toussaint Louverture (film) and won Best Actor at the Pan African Film Festival, he was also nominated for Best Actor at the Africa Movie Academy Awards.

In 2013, it was announced that he’d been cast in a recurring role in Arrow. He will portray “The Captain”, an associate of Professor Ivo.

In 2015, he took on a supporting role in the British film, The Cursed Ones. He had a recurring role on season one of Claws but was upgraded to a starring role in season 2.

In 2018, he was a jury member at the Monte-Carlo Television Festival and Angouleme Film Festival.

In 2019 he both produced and starred in ‘Rattlesnakes’, based on the stage play by Graham Farrow. He has received the highest honors in 2019 in Africa by winning the Best Actor in the Diaspora and Sotigui d’Or for his lead role in the feature film Desrances at the Sotigui Ceremony Awards.

Jean-Louis is married to his wife, Evelyn, and they have three children.

He enjoys watching and playing soccer and is a member of an amateur soccer club Hollywood United F.C., a team consisting mostly of celebrities and former professionals.

Over 800 Haitians Enroute The U.S. Land In Cuba