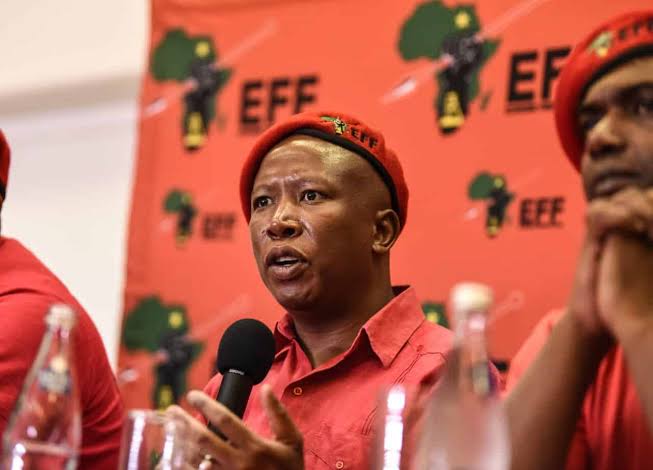 A few weeks ago, the Nigerian Afro-fusion artist was scheduled to perform at “Africa Unite”, an anti-xenophobic concert in South Africa.

This news was met with negative reactions from South Africans who took to social media to voice their displeasure at the inclusion of Burna Boy in the concert.

A while later, a petition letter written by musicians and organisers under the umbrella of Tshwane Entertainment Collective, to the Department of Sports, Arts and Culture raised objections against the concert and called for the department to pull its sponsorship of the event. The petition letter particularly objected against Burna Boy’s inclusion in the concert, because he vowed never to step foot in South Africa and they are demanding that Burnaboy apologizes for his statements.

However, in his reaction to the news Julius Malema affirmed his support for the African Giant, also stating that no one can stop him from performing;

“Looking forward to receiving and being entertained by my brother @burnaboy here at his home called South Africa. There’s no mascot that can stop him from performing, he’s one of our own and we will protect him. We must resolutely oppose regionalism led by political illiterates.”

The vocal activist suffered the backlash from fellow South Africans for his comment. Undaunted, he came back a few hours later to reiterate his undying support for Burna Boy:

“I won’t be intimidated or blackmailed by bed wetting boys, welcome home @burnaboy. South Africa is a home for all Africans, kill me for defending an African brother, bloody Cowards.”

DURING SOUTH AFRICA’S XENOPHOBIC VIOLENCE, MAJOR NIGERIAN ARTISTS INCLUDING TIWA SAVANGE CANCELLED THEIR SCHEDULED PERFORMANCES IN THE COUNTRY. BURNA BOY THEN TOOK TO SOCIAL MEDIA AND ANNOUNCED THAT HE WOULD NEVER SET FOOT IN THE COUNTRY UNTIL THE GOVERNMENT HAD PUT MEASURES IN PLACE TO PREVENT THE VIOLENCE.

South African Rapper, AKA has challenged Burna boy ahead of Burna’s Arrival in South Africa;

The pair, who collaborated on AKA’s 2014 smash hit All Eyes On Me, had a war of words in September over reports of xenophobic attacks in SA and foreigners fearing for their lives.

In a series of tweets, Burna Boy urged black foreigners living in SA to defend and protect themselves against xenophobic attackers. In a now deleted tweet, he also told AKA to beef up his security, before giving him the middle finger.

Burna Boy has thanked Julius Malema for His support;