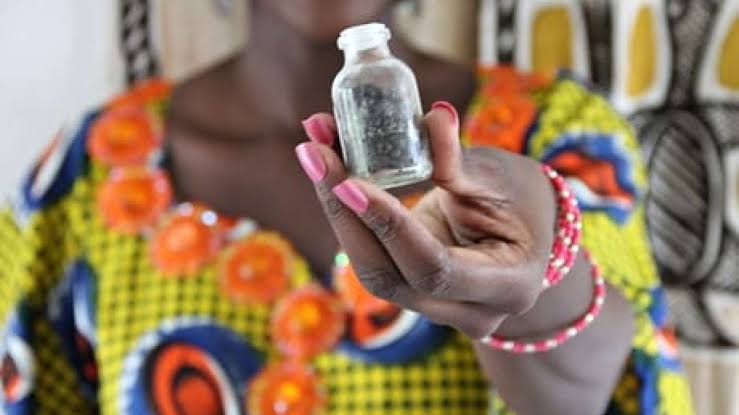 In West Africa, especially Hausa Speaking Parts, what is mainly used in spicing sexual, romantic, and intimate relationships are herbs and perfumes, Called Kayan Mata. Most People in the Islamic parts of west Africa are polygamous. As such, a lot of women are steady competing on who has the juiciest vaginas.

The herbs are called « kayan mata » ( for women) and « kayan maza » (for men). Although, Kayan Mata is more popular. Due to increased polygamy in the northern part of Nigeria. And women are constantly trying to out do Each other on who can please their husband more, sexually.

These herbs have nothing to do with age. As long as you are married and or sexually active.

I remember last year a friend stumbled unto some of them in her auntie’s bedroom -she is in her mid 60’s- and when she  asked her what it was, she said it was traditional mosquito repellant!!!(lol). My friend had no idea she was still sexually active at that age talk more of using stimulants to enhance her performance and keep her husband tied to her waist.

The products used are 100% herbal and are produced strictly by older women, in most cases because of what it does to the man, they would never sell it to a woman who is not married( and believe me they can tell 99% of the times) for fear of what it will do to another woman’s husband.

In certain parts of West Africa, where it is practiced with so much relish and almost like a religion, The best gift your mother in law can give you when you are brought into her son’s house as a wife are packages of kayan mata.

Getting packages of Kayan Mata from your mother in law, is a representation of how much she loves you. Most times when a new bride does not get any Kayan mata package from her mother in law, it is believed you are not liked by her.

Husbands buy it openly for their spouses and in most cases when there is a new rave in town these old women call the men first rather than the women who would haggle in price for they are sure to make more profits from them.

Before a lady gets married time is taken off which can be as little as 2 weeks or as much as 6 months. To prepare her “down below” for her husband.

She is made to drink liquids, insert some, eat some in food, and wash her vagina with some. Each potion has its rules and it may not be that easy but the end justifies the means.

The ones for insertion are meant to tighten the vaginal walls and muscles. Some are so effective that when a woman wants to get married to a man she has not had sex with and she is not a virgin, she can use them and the man will swear with his life he was the one who disvirgined her.

The brides make sure they use the lubricating potions when they tighten their vaginas. Else they would be left with bruises. The bruises from rigorous sexual activities as her husband would not be able to resist her.

The liquid ones are meant to do the job from inside, they work with hormones to increase sensitivity and thereby making the Vagina extra wet and warm.

The perfumes are used on either the body as body perfumes or used to steam the vagina. They are applied on local clay incense burners. The lady covers herself with a cloth while the fragrance envelopes every part of her body, with special attention to the vagina. This also tightens, deodorizes, and increases sensuality in the woman which the husband enjoys.

The ones eaten are used in special foods like meat, cow milk/yogurt. Also a young female chicken that has not started laying eggs. The chicken is cooked in these herbs, leaves and oils. As a result, the bride would be sexually fresh, vibrant and active. Like the young chicken that she ate.

There are other fruits that are naturally grown that enhance sexuality.

Kayan Mata is becoming a rave amongst women. It is slowly metamorphosing from a traditional preparation to a modern tool used for sexual infidelity. Single ladies now abuse “Kayan mata”. Sugar daddies are being milked of their hard earned monies through the use of sophisticated potions and variations of Kayan mata. However, when used within the confines of marriage and for its original purpose, Kayan mata is a marital blessing to a lot of brides. Especially those in polygamous Homes.