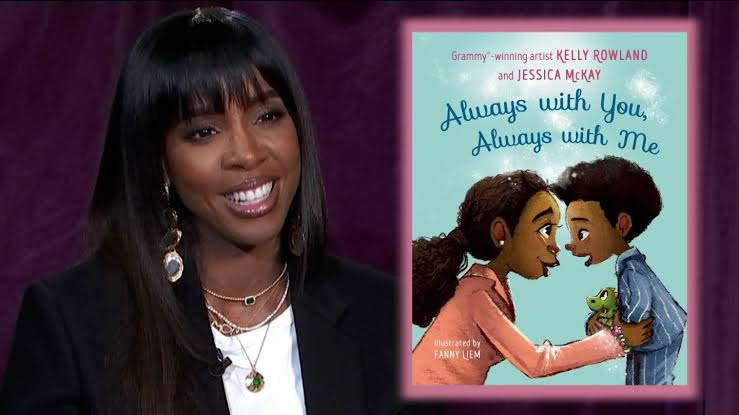 Kelly Rowland says she never saw herself reflected in books as a child, which inspired her to write “Always with You, Always with Me,” a new children’s book that was released on Tuesday (26 April, 2022).

Rowland explained that the book depicts what it’s like for mothers as they try to find that all-powerful balance. It depicts the unavoidable ‘Mom Guilt,’ as well as how mothers work tirelessly to ensure their children’s happiness.

Kelly Rowland is currently working on another project. “Right now, I’m filming a movie, ‘Fantasy Football,’ with big boss Marsai Martin and Omari Hardwick,” she explained. She described the space and working environment at Nickelodeon and Paramount as ‘beautiful and fun. “Is it always this fun? Like, you know what I mean? So, it’s been fantastic.”

Kelly Rowland told the Associated Press on Sunday that she could “definitely see” a reunion with the original girl group (Destiny’s Child) at some point, which included members Beyoncé, LeToya Luckett, LaTavia Robertson, and Herself.

“I could definitely see it. Definitely see it. We’ll see what happens, “Rowland stated. “Latoya and I have recently, actually last year just got our babies together. We posted that picture and it was actually her birthday post for me. But it’s, it’s really beautiful to see the ladies like in, you know, as women. We’re all women now.”

Kelly, who had never seen herself in books as a child, stated that the production of this book was a “big deal” for her, because it allowed her son to see his complexion, a black family, and a woman working as an architect. To be able to have these moments in which he sees himself reflected in the world.

She also stated that it is critical for young people, especially children, to see, whether they are Black, Asian, or a people of color. “That is something we don’t see enough of. And we’re opening up, as is the rest of the world. But I believe it’s important to keep seeing it, so it meant a lot to me because I never saw it growing up.”

‘Always with You, Always with Me’ is a loving tribute to families that honors the work a mother does both inside and outside the home. It’s perfect for any child who needs a little reassurance or just to share a sweet gesture of affection.