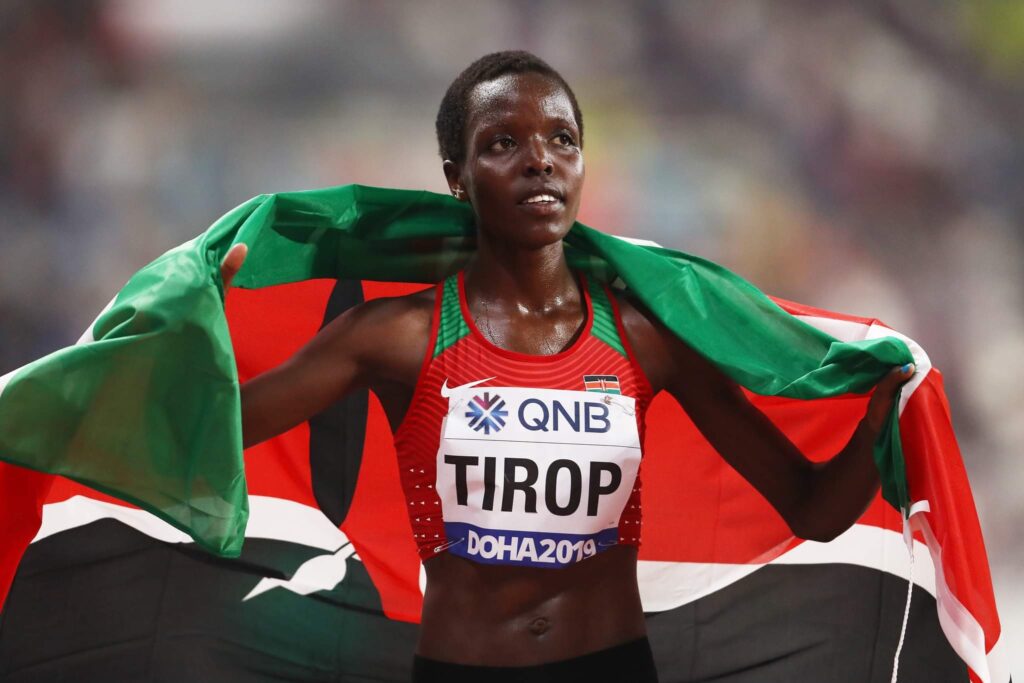 The 25-year-old, Agnes Tirop was found dead on Wednesday, October 13, at her Iten, Elgeyo Marakwet home. According to Barnaba Korir, the chairperson of Athletics Kenya, Tirop had stab wounds in the abdomen.

Tirop has represented Kenya in a number of races. During the Tokyo Olympics she emerged fourth in the 5,000m women’s race after clocking 14:39.62. Tirop carries the 2019 World 5,000m bronze medalist and 2015 senior Cross Country Championships honors.

Tirop was also the winner in the 10,000m bronze at the World Athletics Championships in 2017 and 2019. Just last month Tirop broke the record in the women-only 10km road race.

Suspects in Her Murder

Until now the police are yet to give any details pertaining to the cause of death. Investigations are still ongoing but her boyfriend, Ibrahim Kipchumba Rotich is the main suspect in the murder case. Keiyo North sub county police Commander Tom Makori say they started searching for Tirop after her father reported to them on Tuesday evening that she had been missing for two days.

He noted,” Police started searching for the missing athlete when it was reported by the father. On Wednesday morning, relatives came again to report that Tirop’s husband had confessed that he had committed a crime. Acting on the information we broke into her residence and that is when we discovered her lifeless body on the bed. The body had deep stab wounds on the neck. The husband was missing and that made us believe that he is the prime suspect in the killing.”

Following her demise, different leaders led by Kenyan president Uhuru Muigai Kenyatta took to social media to mourn her death. In his statement the president noted, “It is unsettling, utterly unfortunate and very sad that we’ve lost a young and promising athlete who, at a young age of 25 years, she had brought our country so much glory through her exploits on the global athletics stage. It is even more painful that Agnes, Kenyan hero by all measures, painfully lost her young life through a criminal act perpetuated by selfish and cowardly people.”

In their message of condolence the Athletics Kenya said, “Kenya has lost a jewel who was one of the fastest athletics giants on the international stage, thanks to her eye-catching performance on the track. We are still working to unearth more details about her demise.”

Fellow athlete and trainer, Boniface Kimutai had this to say, “I am her pacesetter. We shared the same training Programme and she was like a mother to all of us. It is painful that she has left us in this manner. It is difficult for our training group to accept her demise.”

World marathon record holder Eliud Kipchoge noted, “I learned the sad news this morning about the demise of our star athlete Agnes Jebet Tirop. I hope and trust that those concerned will get to the bottom of the matter. My sincere and heartfelt condolences to family, friends, sportsmen and women and the entire nation. We pray that God may grant strength to family and friends at this difficult time.”