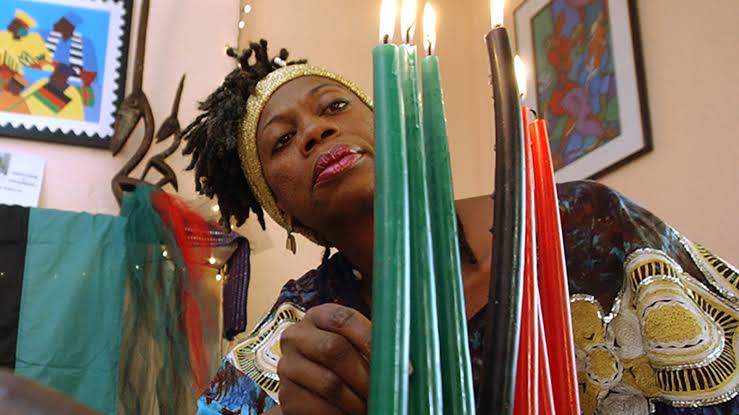 There has been speculations on the Kwanzaa Festival due to its founder, Maulana Karenga. Karenga was said to have tortured Women.

The name Kwanzaa comes from a phrase of Swahili origin, “Matunda Ya Kwanza”, and translates as “First Fruits of the Harvest.” That’s right it’s supposed to be spelled with only one “a,”.

Kwanzaa runs from December 26th-January 1st. It’s supposed to be a week-long holiday honoring African culture and traditions but is tainted by its founder and original purpose.

“I don’t do Kwanzaa. I just don’t. I never have, and the very thought of it evokes some difficult memories and feelings for me.
It’s not the holiday’s religious trappings or its Afro-syncretic fusion of Jewish menorahs, Swahili words, Kemetic, Christian and other rituals.

I understand people do have a perfect human right to adopt or make up the cultural and religious practices that suit them. Rastafarianism, Voudon, Santería, and Candomblé all borrow from multiple traditions, as does Islam from Judaism and Christianity, and Christianity from Judaism, Greek and Roman sources, and so on.
So I have no quarrel whatsoever with those who celebrate and find value in Kwanzaa.ut for many of us who took part in or were simply aware of the Black Panther Party in the late sixties and early seventies, the Kwanzaa holiday is inseparable from the career and persona of its inventor, Ron Karenga, now a professor in California. Back in the day, Karenga headed up an organization called US.

As a tool of COINTELPRO, the federal counterintelligence programdirected at movement organizations, Karenga’s US organization murdered two leading members of the Black Panther Party in Los Angeles, Alprentice “Bunchy” Carter and John Huggins, and two more in San Diego, Sylvester Bell and John Savage. To my knowledge, Mr Karenga has never expressed the faintest remorse or regret for these murders, or for his part in furthering the nefarious aims of federal and local police agencies in their assault upon the movement of those times.

Karenga was later convicted, along with his wife, of kidnapping and torturing two women in his own organization, a crime for which he served four years in prison, and one of which he still claims to be innocent. Some of Karenga’s close and credible associates however, like former US chair Wesley Kabaila, maintain Karenga was not only responsible for those women’s torture, but that it was part of an ongoing pattern over the years.

“I’m a feminist,” Kiilu Nyasha, a former Black Panther in New Haven, CT told me. “How can I honor a holiday made up by a man who tortures women in his own organization?”
She’s got a point. Just now, Spelman College is suspending its Bill and Camille Cosby endowed professorship, folks are hiding or throwing away their old Bill Cosby albums, and places are covering up the Bill Cosby plaques inside the very buildings built with Cosby money.

It’s their very imperfect way, if not of sympathizing with Bill’s long-hidden victims, of at least disassociating themselves and their works from Cosby’s apparent crimes. It’s a reasonable precaution. After all, what would we think of charities and institutions who’d taken Cos’s money and loudly celebrated his generosity but couldn’t be bothered with the slightest acknowledgement of his victims?

What rankles many of us about the annual hoopla around Kwanzaa, and what should disturb those engaged in building today’s movements against injustice and oppression is that the elderly Mr Karenga, much like Bill Cosby before his fall, is enjoying an ill-deserved and unrepentant victory lap. To this day he has utterly evaded any accountability for his part in the murders of Carter, Huggins, Savage, and Bell. For us, what others call “Kwanzaa” has become a time to remember and celebrate the contributions of the freedom fighters whom Karenga’s US organization murdered. “I worked with John Huggins, I knew John Huggins personally,” continued Kiilu Nyasha. “He was a beautiful young brother, only twenty-one or twenty-two. John left an infant daughter less than a month old. He stood in defense of our people’s right to be free.”

Pretty much everybody knew Alprentice “Bunchy” Carter. “He had a real track record,” said former LA Panther Harold Welton.
Before helping organize the Southern California chapter of the Black Panther Party, he was known to many as ‘the mayor’ of Los Angeles, and as an accomplished poet and vocal stylist. Earlier, he was part of the Slausons, a Los Angeles street organization originally formed to defend its neighborhood against local white gangs, one of which was called the “Spook Hunters.” Influenced by the movement of those times, Bunchy attempted to politicize the Slausons, splitting off a formation which called themselves “Renegade Slausons,” before coming into, really helping organize the Black Panther Party in Los Angeles. In those times, one of the highest priorities of government was to prevent the street-level, spontaneously formed organizations in every black neighborhood from becoming political. Organizing inroads with this aim were a key reason in why Chicago Panther leader Fred Hampton was targeted and murdered, also by COINTELPRO. But while widely respected by those organizations, Chicago’s Fred Hampton was an outsider to the street tribes, appealing to them from the outside.California’s Bunchy Carter on the other hand, was an insider among those tribes, presumably a high priority target of COINTELPRO. Bunchy was less than thirty years old.

“Even now after all these years, if Karenga would come forward and admit what he did, and begin in his final years to apologize, and ask forgiveness, to somehow begin to atone for the murder and the torture and the other stuff,” Harold Welton told Black Agenda Report, “we’d have to begin figuring out how to respond in the right spirit. People do sometimes change and come in from the cold. But he’s saving us the trouble. He’s arrogant and unrepentant, and even looked up to by a generation of young folks who know little or nothing about the man or his history.” “In his mid- or late seventies, the unrepentant Karenga is now celebrated by figures like the establishment’s designated dean of “black history” Henry Louis Gates, who put him up as an authority on the struggles of the 1960s, including the Black Panther Party in one episode of his PBS show The African Americans: Many Rivers To Cross. Karenga is regarded as mentor to Temple University’s shameless red-baiting professor Molefi Asante, who justified his underhanded firing of Philly’s Dr Anthony Monteiro with accusations that Monteiro was a “tool of communist apparatchiks.” Karenga pens a regular column in the Los Angeles Sentinel in which he absurdly claims his own organization was targeted by COINTELPRO just as the Black Panther Party was, instead of acting as the instrument of COINTELPRO.

The way many of us see it, people who celebrate Kwanzaa and are getting something out of it should hold that high. We’re happy for them. It’s true enough that Kwanzaa is now bigger than the crimes of its founder and will outlive him. But that doesn’t mean Karenga’s crimes never happened or that they should be forgotten. Someone has to hold high the legacies and the work of John Huggins and Sylvester Bell, of John Savage and Bunchy Carter. Somebody has to remember who they were, what they lived and served for. Somebody has to recall why they died and at whose hands. While you’re celebrating Kwanzaa, some of us will be doing that.

Bruce A Dixon Wrote published his reasons on the Black Agenda Report on the 22nd November 2017.