Lawrence N Brooks, the Oldest World War II Veteran Has Rested At the Age of 112 Years 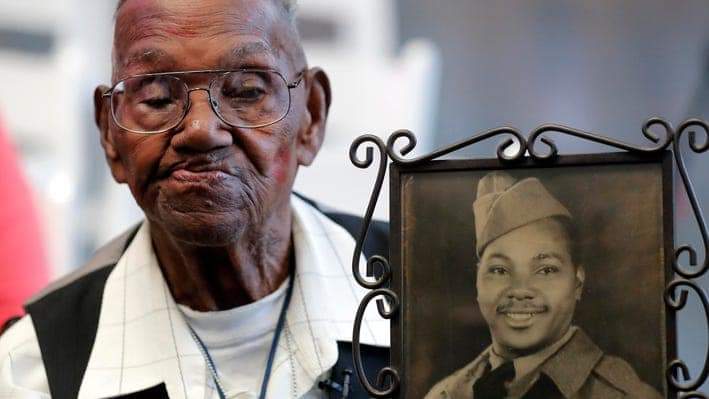 Lawrence N Brooks, who was the oldest World War II living veteran in the US, lost the battle on Wednesday at the age of 112 years. News of his demise was announced by the National WWII Museum and confirmed by his daughter, Vanessa Brooks.

Born in a family of 15 children, Brooks never had a chance to attend formal schooling as his family lived too far from where the schools were. To make up for this, his parents taught him what they could at home.

Brooks was drafted into the US army at the age of 31 years in 1940. He spent World War II serving in the black 91st engineer general service regiment. Brooks was stationed in Australia, New Guinea and the Philippines and here his work entailed cooking, driving and washing for three white officers placed under his care.

Brooks’ service in the US army came at a time when the project was filled with many cases of race segregation. During one of his interviews Brooks once admitted that he felt better treated in Australia than in the US. He noted, “I was treated so much better in Australia than I was by my own white people. I wondered about that”.

Brooks left the army in 1945 as a private first class and went on to work as a forklift driver till his retirement age.  He will be remembered for his kindness, sense of humor and positivity towards life. He leaves behind five children, 13 grandchildren and 32 great-grandchildren.

Lawrence N Brooks cause of death

Although the National World War II museum president, Stephen Watson did not explain his cause of death, Lawrence is believed to have been in and out of hospital in the last few months. During his birthday in September his daughter Vanessa revealed that Lawrence had undergone a surgery, suffered a fall and lost much of his hearing and seeing ability.

Announcing the news of his death, National World War II museum president, Stephen Watson noted, “He was a beloved friend, a man of great faith and a gentle spirit that inspired those around him. He proudly served our country during World War II, and returned home to serve his community and church. His kindness, smile and sense of humor connected him to generations of people who loved and admired him”.