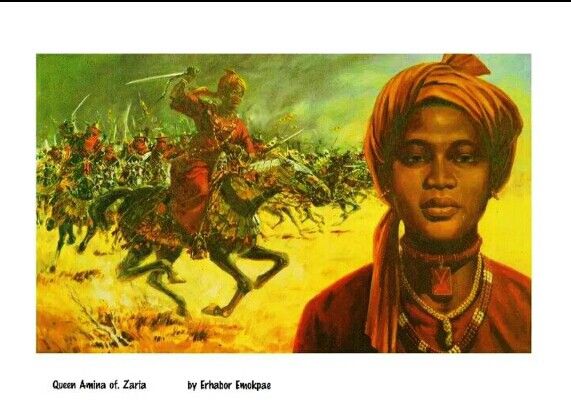 Nigeria has a rich history that encompasses many different kingdoms, each with its ruler. One such kingdom is Zazzau, ruled by the warrior queen Amina.

Amina, popularly known as the queen of Zazzau, marks the record as the first female Islamic ruler. She claimed to be a prophet and has in the past being compared to Muhammad. Born in the middle of the sixteenth century, Amina was the eldest child to her parents, King Nikatau and Queen Bakwa Turunku.

Amina was exposed to battles at an early age where she would participate with her brother, Karama. Amina was well trained in governance and military warfare for her education, something which made it easy for her to rule.

She became the queen of Zazzau around 1576 after her younger brother’s death, who was the king.

She emerged as the first woman to break the iceberg and emerge a queen in a male-dominated society.

Her ability to rule Zazzau better than any man won her the title the warrior queen. Amina also sourced great wealth for the kingdom that saw North Africa record the highest growth in history during her time as the queen.

Here are some of her recommendable accreditations;

Amina, the warrior queen of Zazzau, never married nor had children.

Amina ruled for 34 years and met her death while on a military campaign in Bida, Nigeria.

Meet the Asaro Mud Men, an Indigenous Group That Wins Battles Through the Power of Human Imagination

Dontrell Stephens: The Black Man Paralyzed in the 2013 Police Shooting Dies in Hospital