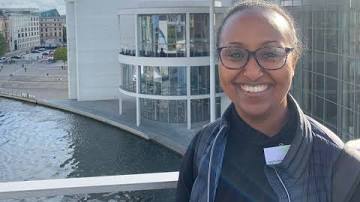 On Sunday 26th September Awet made history after she was elected as the first black woman in the German parliament. Awet was born in Asmara, the capital of Eritrea in 1974. She moved to Germany together with her parents in the mid-1980s and settled in Heidelberg.

For her education Awet studied law and has been dealing with cases of foreigners and asylum law ever since. Awet has been socially active in Kassel where she lives for many years. She has been a member of the Green party since 2009 and equality for the Green parliamentary group in the Kassel city parliament since 2016.

Her Race for the Bundestag

Due to her busy career as a lawyer, Awet postponed her political dream for the longest time. It was after the racist attack in the town of Hanau in 2020 that she decided to run for the Bundestag. When the attack happened Awet contemplated on leaving the country with her husband and son but she decided to stay and fight for her son’s future.

Explaining the implications of the 2020 Hanau attack, Awet said, “What happened in Hanau took me back to the time of my high school graduation in the 90s, which was the time of the racist attacks. At the time, I got a place at university in East Germany and turned it down for safety reasons, preferring to wait a semester. Now my son will soon be at the point where he is building his life and I have to realize: Nothing has changed for him. We are still at the same point as a company. After Hanau I thought about it with my husband: Either we leave the country. Or we fight for our son, who was born here after all. This is also his country. That’s when I decided to run for the Bundestag. I have a responsibility to my son and to many marginalized people in our country whose voices are barely heard.

What Next for Awet

In the Bundestag, Awet plans to fight racism, discrimination and advocate for asylum law. The young lady is however very proud of her appointment in the Bundestag and hopes that it inspires other young women in the world.

Awet had this to say on her appointment, “As a child I couldn’t imagine that there was a black woman lawyer, doctor or politician in the world. Just by sitting in the Bundestag with my black face, I open the door for others. If there are more diverse people in parliament, it’s a sign for everyone.”