Meet Fiona Akoth, The First Female Kenyan Pilot In The US Air force 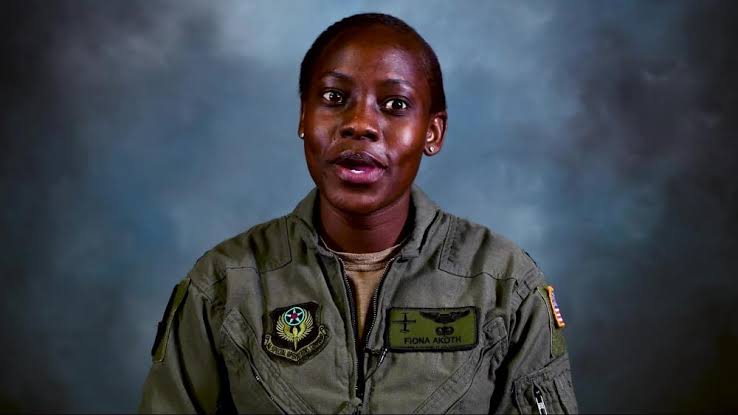 Amongst the first African women in the United States military, stands Fiona Akoth. A young African woman from Kenya in East Africa.
For first lieutenant Fiona Akoth, moving from Kisumu, Kenya, a small fishing city on the edge of Lake Victoria in Africa, to the U.S. was one of the most challenging things in her life.

Fiona Akoth spent her younger years in Kenya with her grandparents while her mother attended college in the U.S. She moved to the U.S. at 13 years old, and attended middle school in Texas.

“I was well engrained in the roots back in Kenya,” Akoth said. “I had to leave a familiar country with a familiar group of friends when I was just becoming a teenager looking for a solid foundation, and that was challenging.”

Fiona Akoth made it through high school and began looking at colleges.
“I knew there was no way my parents could afford college so I had to apply for a lot of scholarships,” Akoth said.
She browsed through many colleges in the U.S., including the U.S. Naval Academy, but the Air Force Academy was the one she chose.

Fiona Akoth said she joined to give back to a country that has allowed her to prosper and also for the challenge. Even though at first her family was wary about her joining, they soon realized how much the Air Force has done for Akoth.
Close to her home in Kenya there was an airport where her and her friends would sit and watch the planes fly every day. It was this moment when she realized that she wanted to be a pilot.
Akoth graduated from the Air Force Academy and is now in the 14th Student Squadron, training to be an Air Force pilot at Columbus Air Force Base, Mississippi.

“It has been my destiny to become a pilot,” Fiona Akoth said. “My grandfather always told me to never give up on my dream and now here I am.”
Prior to her training, Akoth was chosen to be part of the Language Enabled Airman Program because she is fluent in Swahili. LEAP allows Airmen who can speak another language fluently to translate and help build community relations with local populations near military instillations.
“It was a unique experience,” Akoth said. “I got to go back to Africa and help the Air Force communicate with my people.”

Akoth said she strives to be a role model for all the young women in her hometown and anyone who has a dream. She has put in the extra work and dedication and now she is living her dream.