Meet Rashad Mahdi, The African American Pan-African Repatriate To Senegal, Paving The Way For Africans In Diaspora To Do Business And Own Properties in Africa. 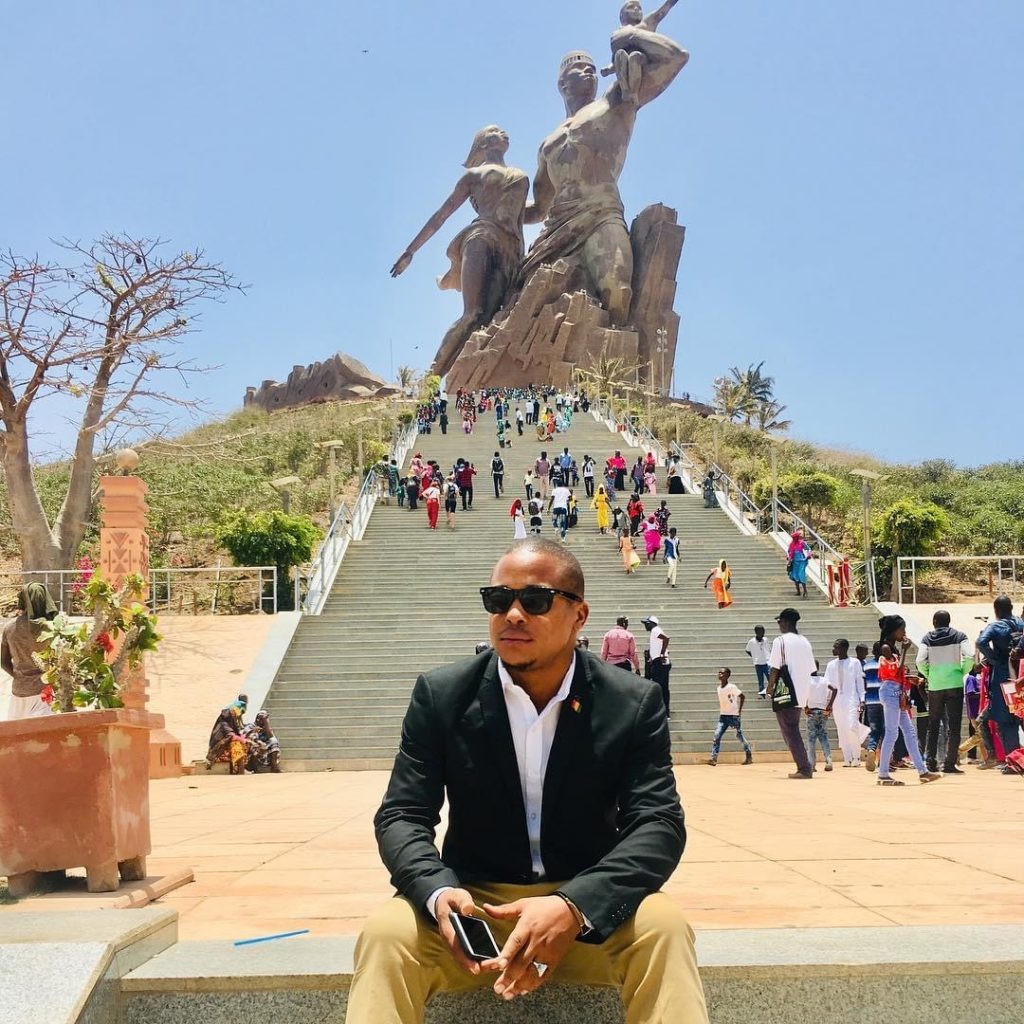 Young, vibrant and innovative. A Pan-African man who has taken the dream of Pan-Africanism and made it into reality.

Rashad J Mahdi, is a media and development consultant and influencer. He is the CEO of Mahdi Media, Who has paved the way for great opportunities in Africa for the African diaspora people. He has lived in Senegal 6 years and has since been building a safe space for investments in Africa.

Rashad Mahdi is the founder of “Made in Africa” and “Africa Day 2020” a network For the unification of Africa and the Diaspora. Hence the Fastest growing network with highest overall reach.

Made In Africa, is an organization that helps to build local businesses and improve local and international commercial trade between the diaspora. The Mahdi’s founded the organization in 2014 after repatriating from the United States to Senegal. Five years later, the project has turned into a resource for those who are interested in investment opportunities or relocating to Africa.

In May 2014 Rashad J Mahdi repatriated to Senegal West Africa with his wife and young son, with a mission of social and economic development in mind. His goal was to bridge the information and commerce gap between continental Africans and those in the Diaspora. He understood that bridging that gap meant implementing strategic and sustainable opportunities for young people, women, entrepreneurs, political figures and the institutions and organizations that serve them.

That year he founded Mahdi Media; which would serve as a multi faceted network of platforms and outlets that all work to serve this purpose.
In 5 years Mahdi Media has created, produced and published hundreds of social content videos; and thousands of photos amassing tens of millions of views across dozens of platforms. In addition to visibility of content, the networks all involve factors that allow its viewers and followers; to actively get involved in the upward productive socio-economic development of Africa and African people the world over.

Rashad Mahdi And His Projects

In late 2014, Rashad Mahdi created the first all English media source in the city of Medina Baye Kaolack Senegal. Named The I AM MEDINA BAYE Project or #IamMedinaBaye (www.IamMedinaBaye.com). The media outlet provides detailed information about visiting and life in the city through its website; social media pages and news blog to as many as 1,250,000 viewers a week.

The media outlet has since created hundreds of videos episodes, news clips, articles, live broadcasts; and covered multiple Presidential visits, international conferences and annual events. In addition the network has successfully facilitated the relocation and/or visit of dozens of international families and students to Medina Baye.

In addition RJ founded the Made In Africa Project; in efforts to encourage the Diaspora to shop with, visit, invest in and relocate to the African continent.

His idea was to get African Americans and others around the world to shop directly with Africa for popular custom fashion, art, organic goods, jewelry and more. The program has since exploded as a leader in African product distribution, shipping over 12,000 pounds of goods around the world since 2014 and being recognized by local government administration as the only e-commerce export business of it’s kind in rural or sub-rural Senegal. In 2016 Senegal’s national postal service, LaPoste Group became a partner for shipping and logistics.

The program’s Investors Club also assists Diasporans with facilitating investment ventures that create local jobs and develop sustainability. The club offers one on one consulting and brokering services for dozens of members investing in a variety of industries including education, agriculture, restauranteering, real estate and urban development.

Lastly the Made In Africa Project organizes and facilitate tours for hundreds of diasporans who travel to West Africa for sightseeing, spiritual education, investment purposes and shopping excursions.
To date the project has created opportunities for more than 500 local artisans and producers while simultaneously positively impacting African product retailers and vendors abroad in the U.S., Canada, Europe, U.A.E and the Caribbean.

The success of his other programs has allowed RJ Mahdi and his team to sponsor and direct the local Kaolack branch of global organization Give1Project in efforts to impact the lives of young people through professional development, mentorship and applied international resources.

The organization, founded by Akon Lighting Africa CoFounder Thione Niang, provides language and computer literacy classes, business incubators, international internships and other opportunities for local young people in 40+ countries. The Kaolack Senegal office managed by RJ Mahdi is not only in the hometown of the organization’s founder but it is also known as one of the most active Give1Project offices in the world.

In its first year with RJ Mahdi’s leadership and media efforts the office has enrolled over 100 new members; financed multiple female owned entrepreneur projects, mentored dozens of high school and university students; built a community library and gathered hundreds of young people for productive conferences and discussions about the development of their communities.

Rashad Mahdi And His Recognition

For his hard work in media, development, investment and project management RJ Mahdi was selected in 2019 as an official Ambassador of the Akoin Cryptocurrency. Created by superstar and social entrepreneur Akon, the cryptocurrency aims to improve the resources and opportunities available to young entrepreneurs on the continent through improved transparency and inclusion in the economic space.

In his first month as an Ambassador RJ was promoted to Bronze level for his exceptional leadership; in the Tokens of Appreciation campaign to help launch the platform in Senegal West Africa. By the end of the Akoin TOA campaign Rashad and his team was recognized as the #1 earners out of 126 teams around the world.

In 2020 Rashad Mahdi is set to become one of the most vocal and supportive Ambassadors of the program; working together with Akon and the Akoin team to not only build economic stability; but to build completely sustainable cities using the currency on the ground in Africa.

In 2019 Rashad Mahdi presented an extensive sustainable repatriate city project plan; to be developed in Senegal for the return of the Diaspora known as Alkebulan. The extensive plans were collectively contributed to by a consortium of Afro-Diasporan members. Representing a wide variety of professional skills and industries. This consortium would be known as The Alkebulan Development Group.
The 600 hectare city plan includes; social, economic, cultural and educational institutions and programs to effectively provide for and sustain up to 10,000 returning families from the Diaspora.

After registering in both Senegal and The Gambia, the group was approached by the Senegalese government; and designated between 500 and 1,000 hectares of land in Thies Senegal. The land located near the Loupoul Ecolodge sits near the coastline about halfway between the Pink Lake and St Louis Senegal. As one of the founding members of the ADG and Alkebulan; RJ Mahdi remains a leading driver of the project set to break ground in 2020 with a 100 year development Plan.

Rashad Mahdi’s YouTube channel has been the main portal for his video media; including his docuseries which details the opportunities of development between Africa and the Diaspora. The docuseries entitled “Africa Is For Africans” ; has completed one full season of 20 episodes in Senegal and The Gambia West Africa covering topics such as; real estate, exporting, local educational and investment opportunities, tourism etc. All from the viewpoints of local black visitors and repatriates from the West.

The ongoing docuseries has serves as a one of a kind look at how the Diaspora can effectively integrate into African society and be mutually beneficial. This rare and educational content has enlightened hundreds of thousands of people around the world; and empowered and inspired countless others to get involved.

Rashad Mahdi And The Media

In addition to years of experienced hosting television, events and radio in the United States; RJ has also been very active as a media contributor and personality on various national and international outlets from on the ground in West Africa.

Currently Rashad Mahdi travels throughout the Senegambia region giving speaking engagements to youth audiences about professional development and leadership. His talks constantly focus on the tools, technology and resources available to young people in the pursuit of success.

Rashad has spoken multiple times before hundreds of students at the University of Cheikh Anta Diop (UCAD) Dakar Senegal, Institute for Superior Management (ISM) in Kaolack Senegal, University of The Gambia (UTG). And numerous other universities, colleges, primary and secondary schools in West Africa.

During this same time RJ has collaborated with dozens of local, national and international organizations; to bring medical assistance, infrastructure development, educational resources, economic programs and technological advancements to Institutions and businesses on the ground in West Africa.
His programs thus far have all been nearly 100% self funded via his Made In Africa Export program and without any government or charitable assistance.

Amongst his projects, there is one which stands out. A project like none before especially by an individual. Rashad Mahdi is pioneering Africa Day 2020. Africa Day 2020 is an Event that is scheduled to hold from the 25th to 31st of May 2020 in Dakar Senegal. The Africa Day 2020 event is promoting the unification of Africa and the Diaspora through various intellectual, entrepreneurial and cultural connections. Highlighting the fact that Africa is indeed for Africans. The theme for this year is Honor.Unite.Build.

Africa Day 2020 is to be attended by notable Pan Africanists.

Speaking on the Africa Day 2020 Project, Rashad speaks powerfully via the following quotes.

“Children Of Africa are done celebrating Western holidays while passing up our own days of recognition due to distraction and stigmas. This year Africa Day falls on Memorial Day in the US but we will meet in Africa and memorialize our own heroes,  the ones that fought UNAPOLOGETICALLY for Africa and African people”