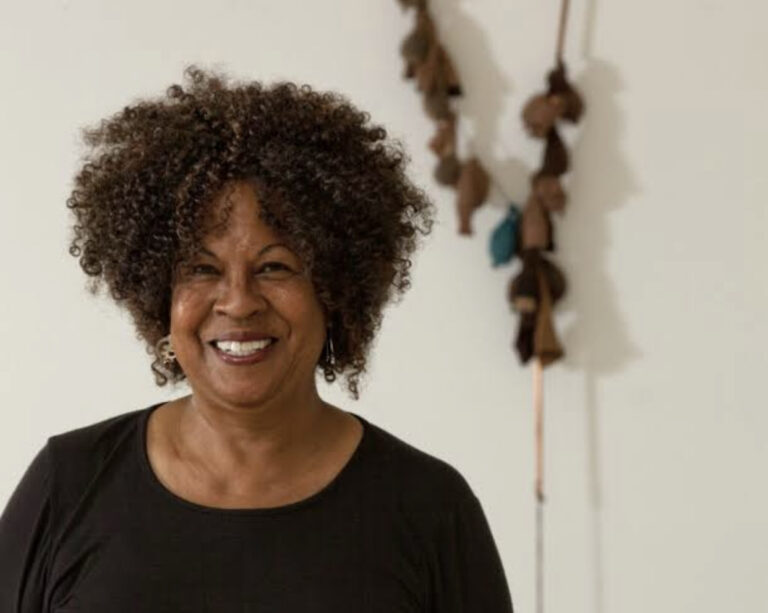 Senga Nengudi, who is lauded for her groundbreaking work in fusing performance art and pantyhose sculptures, has now achieved another historic feat.

The 2023 Nasher Prize Laureate, a Chicago-born artist, was recently announced by KERA News, making her the first African American woman to receive the honor.

In addition to a trophy created by Renzo Piano, the Nasher architect, she will earn $100,000, the greatest monetary reward of any international sculpture contest.

“We are honored to award the 2023 Nasher Prize to Senga Nengudi,” Nasher Director Jeremy Strickstated in a press release announcing the award. “Throughout her career, Nengudi has helped push the boundaries of the field of sculpture, inviting the world to reconsider the temporality of sculptural works, where these works can be displayed, and the materials out of which they can be composed.”

Born in 1943, 79-year-old Senga Nengudi has employed an artistic practice that uses unexpected elements like pantyhose and sand to showcase women’s fragility and resilience of the human body. She is notable for bridging sculpture, music, poetry, and dance to yield works deeply influenced by the civil rights movement, the women’s movement, and second-wave feminism. The work has often come to fruition with the help of friends and other artists.

Senga Nengudi, a 79-year-old artist who was born in 1943, uses unusual materials like pantyhose and sand to highlight the vulnerability of women’s bodies as well as their resilience. She is renowned for fusing sculpture, music, poetry, and dance to create works that were heavily influenced by the second wave of feminism, the women’s movement, and the civil rights struggle. With the aid of friends and other artists, the work has frequently come to fruition.

Works of Senga Nengudi such as “Ceremony for Freeway Frets” from 1978, fuse photography and the power of friendship. This installation, in particular, also accompanied a sculpture of nylon stockings and an unrehearsed and improvisational performance enacting male and female spirits.

“Simply by being, that’s a political statement,” Nengudi stated in a 2018 interview for Hyperallergic.

“SO, WHATEVER COMES OUT OF ME HAS ALL THOSE ELEMENTS OF ME IN IT: I’M BLACK, I’M A WOMAN, AT THIS POINT I’M A WOMAN OF A CERTAIN AGE, WHICH ALSO HAS ISSUES RELATED TO IT. SO SIMPLY BY BEING, I AM THOSE THINGS.”

In addition to her awards, The works of Senga Nengudi will be featured in an extended, major exhibition at Dia Beacon, starting February 17, 2023.