Meet The Afar People, Who Live On The Earth’s Furnace 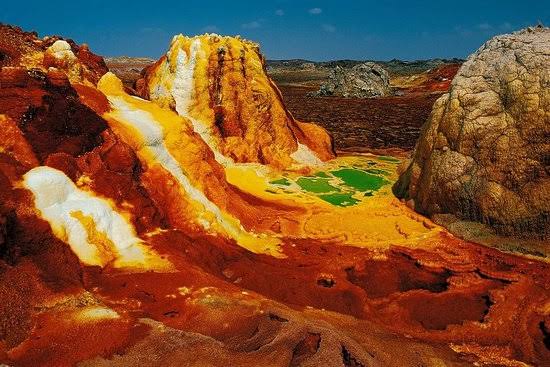 There are 3 million Afar people spread across 3 countries in the Horn of Africa: Ethiopia, Eritrea and Djibouti. The Afars have always been nomadic people, famous for the tribal wars they waged with their neighbors, the Issas. The Afar people would move from one place to another in search of grass for their camels and cows. They prefer to be known as the Afar. As the Arabic word “danakil” is an offensive term to them. They are a proud people, emphasizing a man’s strength and bravery. Prestige comes from killing one’s enemies.

Afar Of The Danakil Desert

The Afar consist of two subgroups: the Asaemara (“red ones”), who are the more prestigious and powerful nobles living primarily in the area of Assayita; and the Adaemara (“white ones”), who are the commoners living in the desert areas. Those who live in the desert inhabit one of the most rugged regions in the world, known as the Afar Plain or the Danakil Desert. One area, called the Danakil Depression, consists of a vast plain of salt pans and active volcanoes. Much of it lies 200 feet below sea level and has daily temperatures as high as 125 degrees F. The average yearly rainfall is less than seven inches. 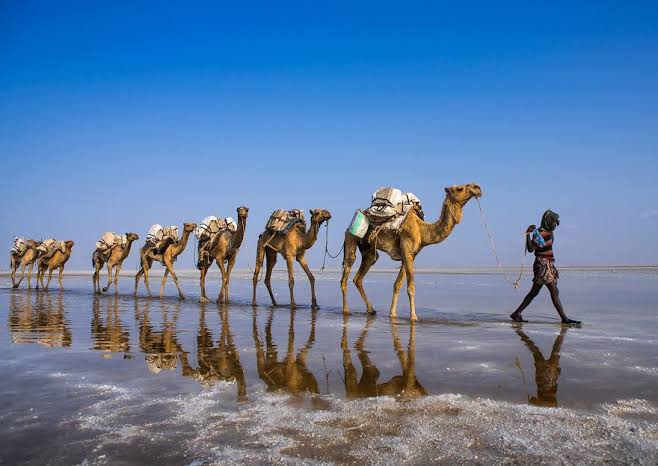 The region where the Afar live is often referred to as the Afar Triangle.  This is one of the earth’s hottest and driest spots, but also with some of the lowest temperatures on earth.  Some sources say the temperatures there are the hottest on earth.  Much of their territory is desert and salt flats, cut by great cracks from the sun’s heat.

Older sources referred to the area where the Afar live as Danakilia, and the people as Danakil.  The latter name, however, is the name of the desert, not an ethnic name.

History Of The Afar People

Little is known of the actual specific history of the Afar people.  The Afar claim a descent from Arabs, through a mythic Yemeni ancestor, though they differ racially, linguistically and culturally.  A correspondent from Afar reports that the Yemeni association derives from some clans/tribes of the Afar with Yemeni origins. Who have been incorporated in to the Afar over the centuries, such as the Able and Adal. 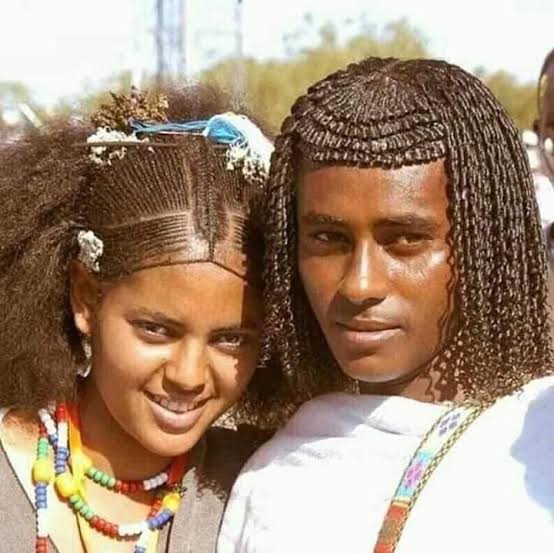 The Afar are a dark brown or black people with usually fine facial features, similar to the darker Somali and Oromo.  They are likewise distantly related culturally and linguistically to the ancient Beja group of peoples, who are Southern Cushites, and related in turn to the ancient Egyptian race. 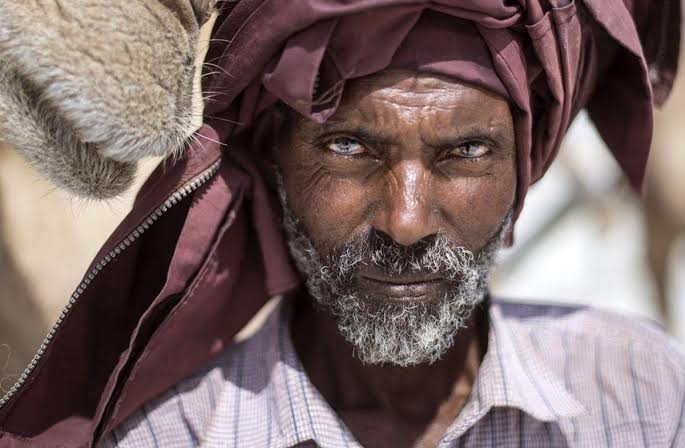 They are referred to by some sources as the Danakil, from the Arabic name of the Danakil Depression, or Desert, near the Red Sea in Ethiopia and Eritrea.  The Amharic name for them is Adal.  Adal was the name of an ancient Muslim empire that almost defeated the old Abyssinian Empire at one time.  They call themselves Afar, which means in their language “The Best” or “First.”

The Afar were active in the Arab slave trade, serving as guides to Arab slave traders.  A major slave route to Arabia crossed Afar country, with Afar reportedly still actively trading in slaves as recently as 1928.

Popular history gives some insight into the history in the two traditional divisions of the Afar.  Tradition indicates that the Asayahamara (The Red Ones) are descended from a group originally invading from the Ethiopian Highlands at one time, who imposed their rule on the Adoyahmara (The White Ones).

It is thought the color designations came from the reddish soil deserts inland, toward the direction the newcomers came from, and the white saline coastal areas, where the Adoyahamara are still more numerous.  The Reds remain socially dominant, and claim ownership of the lands, while the Whites tend to be the herders.  Both classes are, however, distributed among all the clans of the tribe. 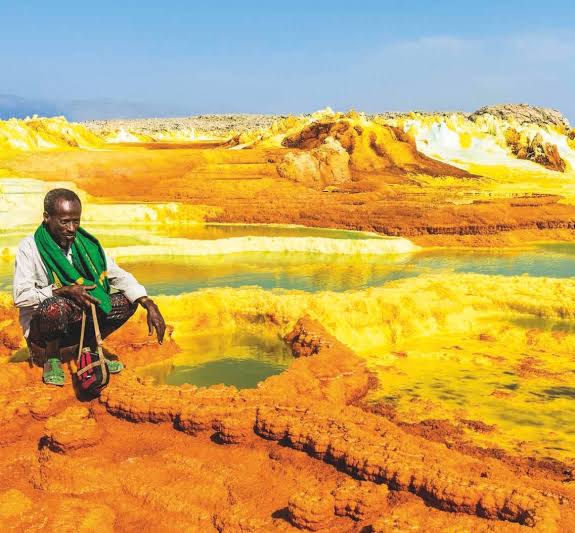 The Afar are one of the people about whom little is available.  Their inaccecssibility makes it difficult to obtain reliable objective information.

Through their myths of origin, some clans of the Afar claim Arab descent.  Their language, however, and the traditional animistic practices underlying their more recent adherence to Islam, indicate the Afar share a history with neighbouring Cushite peoples.  No written Afar records exist from previous eras, and the Afar remain an oral people.

The Afar are a distinct ethnic group. Referenced as a separate ethnicity as far back as we have information about peoples of the Horn, though details are few.  Every people, though, is related to other peoples, of course, at some level.  The Afar are a distinct Eastern Cushite people, whose language and culture are related to the Somali and Oromo.  They are very traditional in culture and belief, retaining many ancient Cushite animistic practices.

The Afar maintain a loose confederation of four “sultanates”. Rather than being hereditary sultantates, each sultan is appointed by the people; but reportedly is chosen from alternating segments in each of the four sections of the Afar.

The four sultanates are Aussa (also Asayita or Asaita) and Biru in Ethiopia, and Tajoura and Raheito in Djibouti.  One older source reports a fifth sultantate, Gobad in Djibouti.  The Sultan is the religious, as well as the political, leader of his clan of the Afar.  Some sources report that there were traditionally eight sultanates, that than four.

The Afar remain aloof from all central governments, unresponsive to opportunities and suggestions for change, resistant to domination by others.  They are cautiously open to specific benefits like medical care or water programs.  Groups of Afar can be seen camped just outside the edge of Djibouti town; where they come periodically for trade or medical care.

They are nomadic or transhumanic (moving from highland to lowlands with the seasons and rise and fall of the flood waters of the rivers).  They carry their houses with them and reassemble them when they make temporary settlement.

Women Of Afar Run The Home 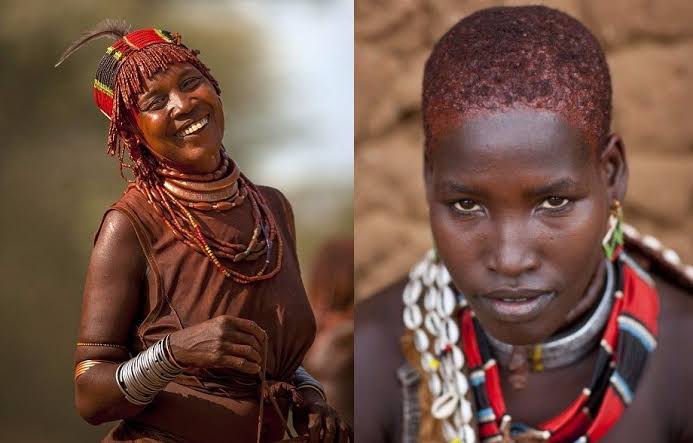 Women run the home and settlement and set up the houses, which they carry on camels when they move; They also milk the goats and make butter or ghee.  They are also the musicians in the tribe. 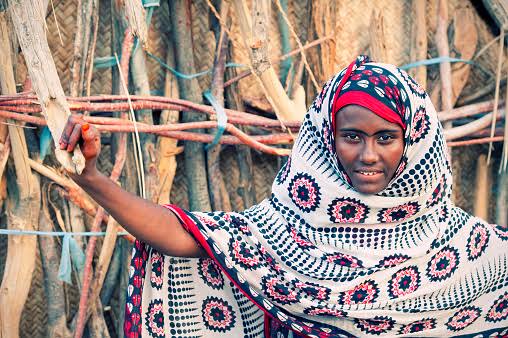 Marriage preference is first cousin, as is also common among Semitic peoples.  Descent and marriage, however, follow the father’s clan (“patrilocal”) rather than the mother’s (“matrilocal”).  Divorce rates are high. 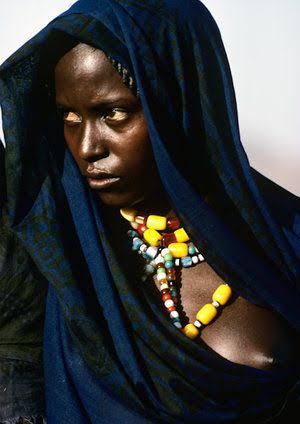 The women usually are bare-breasted, unusual for professed Muslim peoples.  The Afar practice infibrilation, the sewing together of the female vulva. A type of female “circumcision,” practiced by other Cushite peoples, and some Bantu peoples.  Similarly, boys are circumcised upon coming of age. 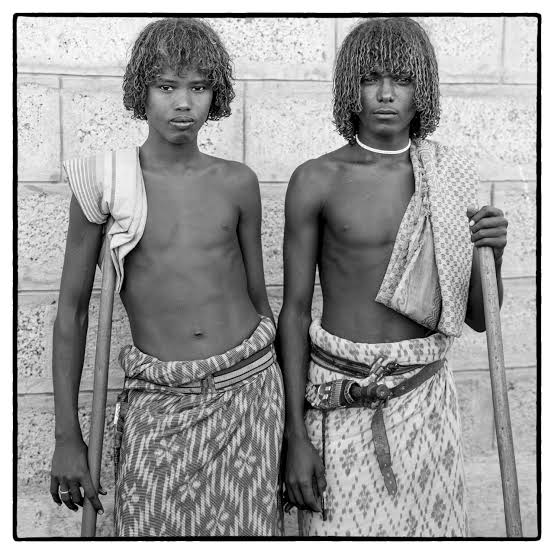 A large proportion of them mine salt from the Danakil Depression. They trade this with the Yemenis across the strait, or with Ethiopians for grain.  They raise mostly goats, but some sheep, which they need for the required Muslim celebration feasts.  The Afar also use camels for pack animals, but do not ride them.